Reports of Richard Dunne's retirement have been greatly exaggerated.

After a tough, but creditable season in the Premier League, considering how bad QPR were and Dunne's age, we were surprised to see reports emerging late last night that the Dubliner had decided to retire. The former Irish international surely has at least another season of football left before walking away from playing.

It turns out that's exactly how Dunne feels, and he won't be hanging up his boots, as numerous reports suggested. QPR's head of media and communications, Ian Taylor, confirmed this morning that the Honey Monster is hungry for more football. 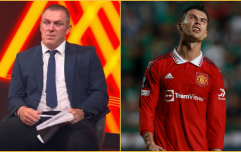 END_OF_DOCUMENT_TOKEN_TO_BE_REPLACED

Dunne will be on the look-out for a new club though when his contract with QPR expires at the end of this month. The defender, who will turn 36 in September, played 80 times for Ireland, scoring 8 goals, before retiring from international football last year.


popular
World Cup 2022 Day 18: All the major action and talking points
Gary Neville sticks up for Ronaldo as contextless pictures and videos taken as gospel
Rory McIlroy explains 'falling out' with Shane Lowry that lasted a few years
Cristiano Ronaldo's sister blasts Portugal boss' decision to start forward on the bench
Brazil star responds after Roy Keane slates dancing celebrations
Eniola Aluko responds to criticism after on-air mistake on ITV
Ballyhale's Colin Fennelly felt Ballygunner's victory speech was disrespectful
You may also like
2 months ago
Richard Dunne was not hopeful that this Ireland team will qualify for Euro 2024
2 months ago
The five types of five-a-side players filling your team during the GAA off-season
4 months ago
Richard Dunne backs Nathan Collins for future move to Man United or City
6 months ago
Richard Dunne criticises Ireland performance in defeat to Armenia
3 years ago
Richard Dunne reveals the anti-Irish abuse he faced at Stamford Bridge
4 years ago
Harry Redknapp compares Harry Maguire to legendary Irish centre-back
Next Page