There's only one thing that is being spent on.

A cool €9,000 would go a long way to paying for an away trip to God knows where when Ireland face a mystery opponent in a World Cup playoff, it'll then also come in handy when Martin O'Neill's side travel to Russia to win the World Cup.

But how does someone go about winning that much money? It's easy really just go and correctly predict every World Cup qualifier from Monday and Tuesday.

That's what one lucky punter from Dublin did, predicting a staggering 18 results at odds just shy of 2000/1 and a stake of €4.50 at Ladbrokes.

"This customer must have a crystal ball because just looking at all of those matches would make you dizzy, let alone predict who will win every one of them. Fair play to him. He got change from a fiver after placing the bet and now he's collecting nearly nine thousand euros. That's not bad for a mid-week wager." 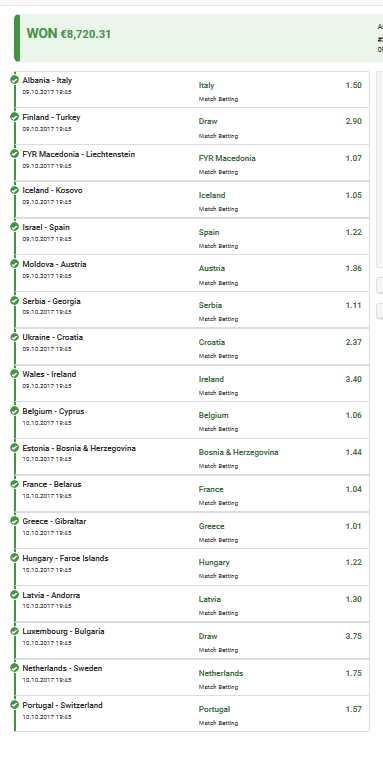 popular
Sam Bennett's green jersey masterclass got Lance Armstrong talking
How The Mountain lost 36kg ahead of boxing fight with The Beast
Irish cyclist Sam Bennett delivers classic putdown to British cycling magazine
"He's found a way to do it. Whether that's good or bad for the game, I don't know"
The SportsJOE 12 o'clock quiz | Sam Bennett special (Day 184)
QUIZ: Can you name every player to score four goals in a Premier League game?
Peter Sagan pays classy tribute ahead of Sam Bennett's big moment
You may also like
8 months ago
Doherty hoping to take down United as Parrott becomes key man for Spurs
10 months ago
Daniel James has largely surpassed Gareth Bale in club football this season
10 months ago
Liverpool are the Premier League's best team but remain unconvincing
10 months ago
Wilfred Ndidi is the best defensive midfielder in the Premier League
10 months ago
Chelsea creeping up on City as Tammy picks up where he left off
11 months ago
Scott McTominay's stats compared to Fabinho's aren't as bad as you'd think
Next Page