The Republic of Ireland lost 2-1 to Norway at the Aviva Stadium on Thursday night. Neither side have qualified for the upcoming World Cup, but it was Norway who looked like the team who were better placed to reach Euro 2024, even without their star player Erling Haaland.

Leo Ostigard scored the opening goal of the friendly for the away side, before Alan Browne equalised with an impressive strike from 25 yards in the second half.

However, Ohi Omoijuanfo scored Norway's winning goal five minutes before half-time, finishing in the box after some sloppy Irish defending. Both of Norway's goals came from set pieces. Here is how we rated the Ireland players. 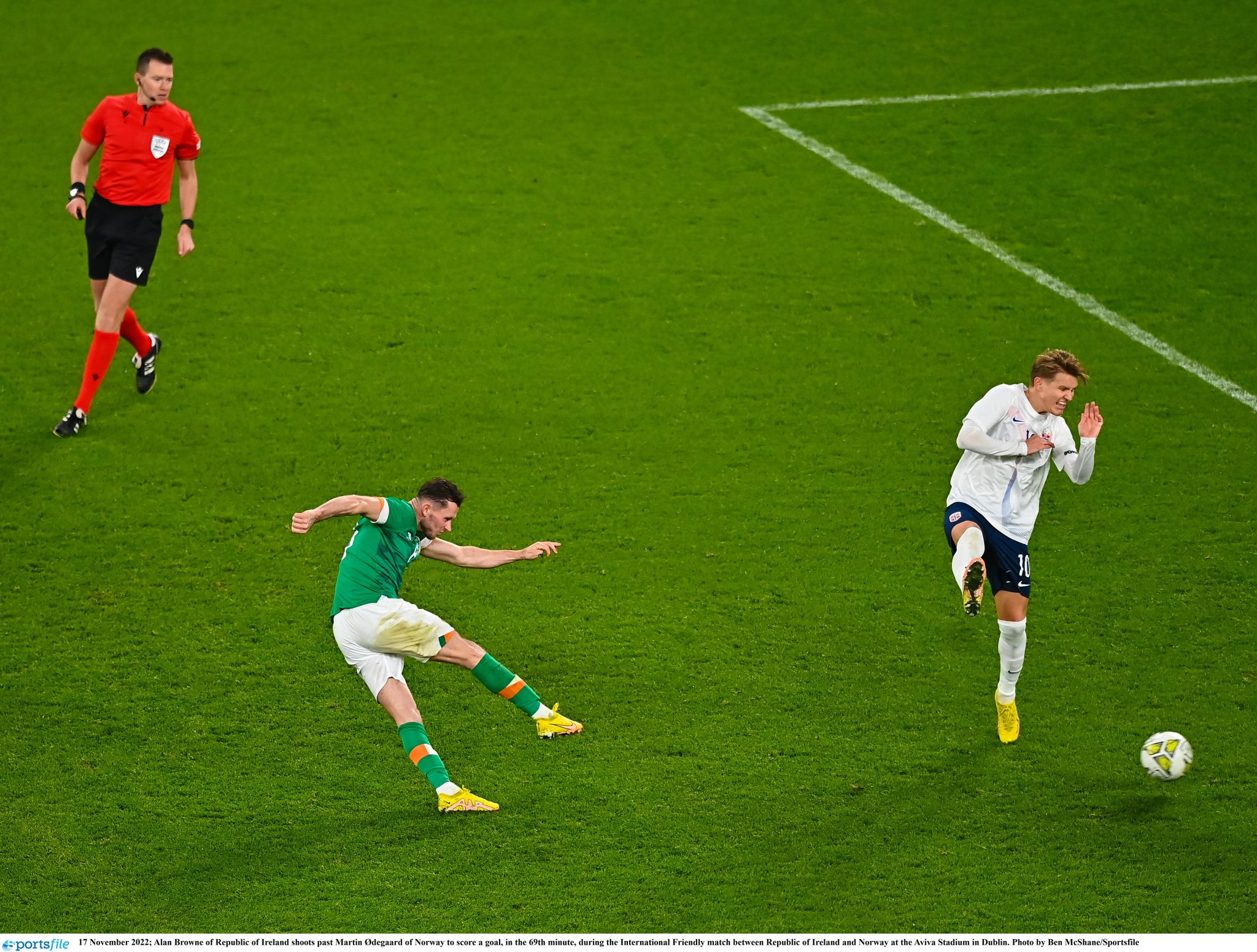 The Southampton goalkeeper couldn't prevent either of Norway's goals and perhaps should have been quicker off his line for the away team's second goal.

END_OF_DOCUMENT_TOKEN_TO_BE_REPLACED

Doherty started at right wing-back and helped provide width by hugging the touchline. The Spurs defender, however, was often isolated during the first half as Ireland focused their attacks down the left channel. Doherty regularly arrived late in the penalty area at the back post, but his teammates rarely found him.

Collins has had a difficult season at club level for Wolves and was partly at fault for Norway's second goal. His attempt at a headed clearance landed straight to goalscorer Omoijuanfo.

The West Brom defender played some impressive passes in the first half. Like the rest of Ireland's backline, however, he should have done more to prevent Norway's opener.

Egan was Ireland's captain on the night and has been one of the team's best players under Kenny. The Sheffield United defender, however, was among those at fault for Norway's opening goal.

Like the rest of the Irish defence, Egan failed to prevent Leo Ostigard from scoring a header from Martin Odegarrd's corner just before half-time.

Egan, however, almost equalised in the second half but was unlucky as the ball bounced off his shin after it was crossed into the box by O'Dowda

Half-time: Republic of Ireland 0-1 Norway - Leo Ostigard's header from a corner ensures the visitors lead at the break. #IRLNOR

The Cardiff City winger started at left wing-back against Norway and was tasked with providing Ireland's attacking thrust. O'Dowda often collected possession in the final third, with the other players clearly looking for him as an outlet.

However, in the opening period, the wing-back failed to deliver a decisive cross or was closed down by the opposition. In the second half, O'Dowda offered more of a threat, and his cross eventually led to Browne's goal. The winger could be a potentially useful option for Kenny.

Cullen was named Ireland's player of the year last week and has become a key part of Kenny's team. His passing was crisp against Norway, and he screened the defence well, picking up loose balls and keeping play ticking over.

Ireland have several shortcomings in their team, but Cullen establishing himself in the starting XI has been one of the positives from Kenny's tenure.

Molumby has performed well since earning his starting spot ahead of Jeff Hendrick and has added some much-needed bite to the team.

The West Brom midfielder was on hand to provide defensive cover when needed and stopped Ola Solbakken in his tracks after the Norway forward found space in the Irish penalty area.

Browne was on the edge of proceedings in the first half but scored a brilliant goal 20 minutes from full-time.

The Preston North End midfielder hit a wonderful low strike from distance into the bottom corner, a goal which came from nothing, to make it 1-1.

Republic of Ireland 1-1 Norway - Alan Browne equalises for Ireland with a fabulous finish from outside the area. #IRLNOR

Robinson replaced the injured Troy Parrott in Ireland's starting XI but struggled to make an impact in the first half. The Cardiff City forward improved in the second half, however, and linked up well with his clubmate O'Dowda.

The Swansea City striker was on the edge of the game in the opening half and was a bit loose with his passing. Overall, it was an off-night for a player who will be important to Kenny when the Euro 2024 qualifiers begin next March.

You may also like
3 weeks ago
"I was called ‘the Northerner'" - Martin O'Neill opens up on his time as Ireland manager
4 weeks ago
James McClean gets straight on to Graeme Souness after being told 'to get on with it'
1 month ago
Stephen Ireland explains why his Ireland career ended after only six caps
1 month ago
Stephen Kenny responds to Brian Kerr's criticism of his performance as Ireland manager
1 month ago
"Nobody could touch him that day" - When Roy Keane reigned in Spain
1 month ago
Man City and Juventus among major European clubs scouting young Ireland star, Rocco Vata
Next Page