Yanis Boulmelh, an Irish-Algerian player for Firhouse Clover, has said that he's been dealing with racial abuse for the 12 years that he has been playing football in Ireland.

Sometimes, he says, the abuse has been brushed under the carpet.

'Let your feet do the talking', 'keep your head up', 'don't worry about it, show them out there on the pitch' - that's how he's had to deal with it himself.

So on Friday night during my match a player called me a “Paki Bastard” and obviously as soon as he said it I went for him but obviously players were pushing me away from it and 2 players off my team said it to the referee while I was trying to confront...(contd.) pic.twitter.com/qHEYC6CKV8

But in a recent Leinster Senior League game, Yanis reacted.

The 19-year-old claimed that he was called a 'Paki b****rd' and it proved to be a breaking point for him. It was time to take a stand.

"It was from a person I know," Boulmelh told SportsJOE.

"I just didn't expect him to say it. But even if it was from someone I knew, or someone I didn't know, I still would have reacted the way I reacted.

"Every time I've been called something, I've confronted the player. They're always hiding behind their teammates. It's never come face to face."

Boulmelh is more frustrated because he feels that not enough is being done to stop this type of racial abuse that he's experienced.

That's why he is speaking out now.

"Raheem Sterling and Ainsley Maitland-Niles have inspired me with what they've had to say and what they've experienced," he explained.

"That kind of motivated me to get the word out and let people know that it's happening in Ireland and not just England.

"It keeps happening and the reason it keeps happening is that there are never any serious consequences for players that do commit these offences. You might blame the FAI but the players are obviously not afraid to say what they want to say because they can get away with it." 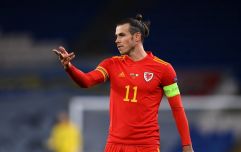 END_OF_DOCUMENT_TOKEN_TO_BE_REPLACED

Leinster Senior League chairman David Moran did however say that two players have already been suspended for such incidents this season, and he confirmed that the LSL will be launching an investigation into this particular one too.

He also explained how their processes work around reporting and investigation.

"The process comes under rule 14 of the FAI's rulebook, which is on their website," said Moran.

"We get a written statement from the player, which we have, we get the referee's match report, which we have, and then the process then is that the other party then have a chance to respond to the allegations against them and then we bring in both parties separately to go through it. But everything goes to the cultural department in the FAI.

"I dot my i's everywhere. We do everything properly. Unfortunately, Yanis went through Twitter, but that's his right, it's a democracy.

"The process is basically: he goes through the club secretary, he makes the complaint to the referee, they contact the league and they tell us that a complaint has been made. We gather all the paperwork and it all goes off to the FAI and they tell us what to do next.

"Usually, we get both sides in. We get a signed witness statement and a decision is made under rule 14. We then send everything back to the FAI's cultural department who make sure we've applied the rule correctly."

The problem, however, for Yanis, apart from the obvious abuse, is that he has felt in the past in other matches that referees can be selective with their hearing and he wonders how the issue can be solved when those responsible choose not to listen.

"First of all, you're here to protect the welfare of the players," he said.

"I remember one time I was playing for St. Kevin's Boys and I was called a 'Paki' during the last few minutes of a match and the referee was only a few metres away from it and the players reported it. I just couldn't believe he didn't hear it. I couldn't believe it.

"This Show Racism The Red Card and the lead up to games with all the publicity is shite talk. It's all bullshit. Complete bullshit. Nothing is ever done."

"One of the best coaches in Ireland is Mokhtar Addani.

"He's worked with Joey's, Wexford Youths, UEFA A license, but he's been the subject of racial abuse by players, coaches, and the abuse he's received has been just as bad as the abuse that I've received."

The Leinster Senior League told SportsJOE that they have encountered two incidents of racial abuse this year and in both instances the guilty parties have received suspensions.


popular
Galway fans' frosty reception for Davy Fitz doesn't make any sense
The most Stone Age tackle you've ever seen gets South African lock straight red card
Ryan Manning hacked to the ground by Henri Lansbury in ruthless assault
'Brian was a genius... he would've killed you to even win a game of touch'
"Johnno went, 'We’re not moving! You're trying to mess us about!'" - Ben Kay recalls red carpet controversy
Final question of Ryder Cup press conference has Team USA in all sorts of trouble
"Some of the generals wanted me executed" - Irish rugby legend on flag caper that went wrong
You may also like
2 months ago
Man hands himself in to police over his own social media posts to England players
2 months ago
What these people did to the vandalised Marcus Rashford mural was just beautiful
2 months ago
Andrew Lawrence's Twitter deleted and comedy shows cancelled after 'racist' tweets
3 months ago
Scotland join England in taking the knee for their Euro 2020 match
3 months ago
Marcus Rashford comes out fighting but Paul Scholes isn't buying it
3 months ago
Rio Ferdinand sends message to Wolves fan removed from stadium for racially abusing him
Next Page