His fellow pundit Ian Wright was among those who took issue with Keane's comments on ITV following the match. The former Ireland and Manchester United captain made the mistake of calling the World Cup semi-final as he had seen it.

Croatia were the better side and were good value for their 2-1 win after extra-time. They deserve their place in the final against France on Sunday.

"Roy Keane is back with us to restore some calm."

"I think Croatia deserved it in the end," Keane said.

"As the game went on they seemed to get stronger. They were more streetwise, showed more composure. England gave two sloppy goals away. That lack of experience maybe came into it, but all credit to Croatia, and credit to Gareth. He’s been class throughout the tournament, a class guy, but this game can kick you where it hurts."

The Irishman went on to say that Harry Kane had looked "sluggish" in the match - which he had - and that England were always outsiders to win the trophy - which they were.

"You look at all these England players, a lot of them haven’t actually won a trophy. And it’s highly unlikely the first trophy you’re going to win in your career is going to be a World Cup so I think that caught up with them as well, that lack of experience."

That was tense #worldcup #CROENG https://t.co/xeyOH11TCI 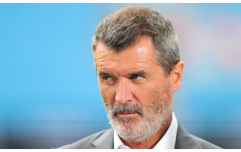 END_OF_DOCUMENT_TOKEN_TO_BE_REPLACED

Keane's comments weren't particularly controversial. Yet, he was trending on Twitter in the UK, with many taking issue with his bluntness. The former United midfielder triggered a very strong reaction from many on social media. Former Labour leader Ed Miliband even tweeted about Keane, saying he was "awful."

Wright was among those who didn't appear happy with Roy delivering some home truths after a painful defeat for England. "You were talking about the final. Thinking about where the parades were. You need a reality check," Keane said.

Wright hit back, saying Keane couldn't just be happy for the English ex-pros who were happy to see the team reach the semi-final and the pair bickered as Gary Nevile sat between them not knowing where to look.

However, it appears to two have made up and the whole thing was a storm in a teacup. Wright posted this image to his Twitter account on Thursday evening of the pair at a bar in Moscow.

It appears that Wright, unlike some on social media, knew that Keane's comments were either tongue-in-cheek or were pretty accurate about England's display.

You can watch ITV's post-match discussion, which featured Wright and Keane's tiff, here: