Was the Republic of Ireland v England at the Aviva Stadium the worst game of football ever?

The Mirror's website ran a poll asking just that, and although there's only one option, we've a feeling the answer would've been the same regardless.

Those in attendance, and a considerable amount watching at home in Ireland and England, had to endure a dreadful game of football. The Mirror ran another poll asking if viewers made it through the entire 90 minutes, and most say they didn't.

The British football writers in attendance had no such luxury and here's how they rated Ireland's performance. 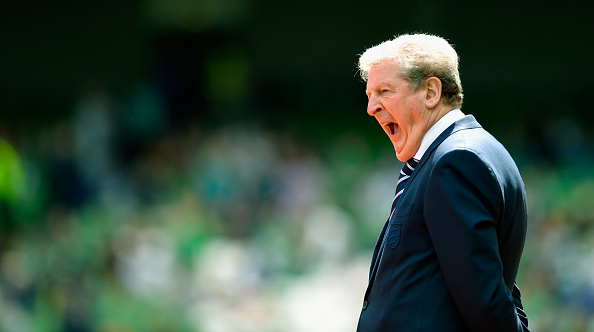 In the Guardian, Daniel Taylor felt that Ireland had the most to take from a tedious afternoon.

Martin O’Neill was entitled to reflect that Ireland had the better chances, most notably through Daryl Murphy in the first half. Robbie Brady was the player who did the most to lift the tedium and their defence can feel satisfied with the way they nullified England’s threat.

Also in the Guardian, Andy Hunter was less complimentary to O'Neil's men.

This is a limited, pedestrian Irish squad. The Ipswich pair, Murphy and David McGoldrick, did not convince in attack and the over-reliance on Aiden McGeady for creativity was evident once more. A sudden, major improvement will be required to worry Scotland in Saturday’s crucial qualifier.

In the Independent, Sam Wallace said:

Twenty years ago, this international fixture was abandoned because of a riot and this afternoon, 20 years on, there were times during England’s return to Dublin when it felt like another abandonment might be the best for all concerned.

For Ireland, the big test lies a week ahead against Scotland at home when they must win to keep pace in their Euro 2016 qualifying group and, given the limitation of their resources relative to England, there were reasons to be encouraged.

In the Telegraph, Henry Winter said Ireland were more organised defensively, more assertive in attack and Aiden McGeady was 'superb'.

While the Republic enjoyed good performances from the likes of Aiden McGeady and Robbie Brady, England had few redeeming features, barring a few promising breaks from Jack Wilshere and a couple of surging runs from Andros Townsend.

END_OF_DOCUMENT_TOKEN_TO_BE_REPLACED

Also in the Telegraph, Luke Edwards gave Daryl Murphy a 4 out of 10 in his player rating - the lowest in otherwise fairly sympathetic markings for Martin O'Neill's men. Murphy was in good company - Raheem Sterling and Wayne Rooney received the same rating for the visitors.

In the Daily Mail, Neil Ashton was at least somewhat impressed by Ireland's display, particularly from Robbie Brady at left back.

This was a better day for Ireland and they had chances, notably when Ipswich Town’s revitalised striker Daryl Murphy took advantage of a communication error between Ryan Bertrand and Chris Smalling.

England never really came to terms with Brady, a winger relegated with Hull City at the end of the season but emerging here with his reputation enhanced.

His 50th minute free-kick stunned Hart, zipping off the surface and unexpectedly hitting the England keeper in the chest. Hodgson’s team got lucky with the rebound.

Coming so soon after the Champions League final, it offered a sobering comparison between the international game and elite club competition. And where footballers from the British Isles stand in the greater scheme of things. If the conduct of supporters and the match-going experience has moved on in the last two decades, some things remain the same.

Ultimately, the 'key events' section of the Guardian's liveblog summed up the match almost perfectly. 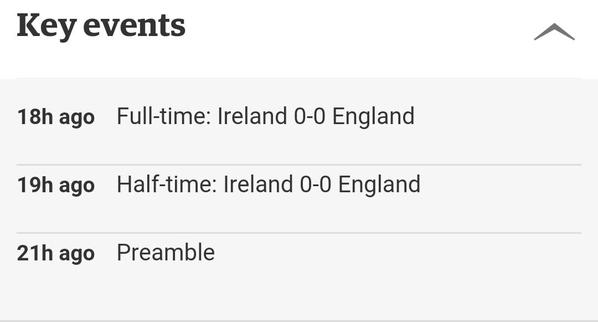