"He's good at everything. His presence is phenomenal" - Haaland driving defenders scatty

Haaland gave back as good as he got from the Sevilla goalkeeper.

Leading 3-2 from the first leg against Sevilla, the Norwegian opened the scoring ten minutes before half-time then scored a penalty early in the second half. 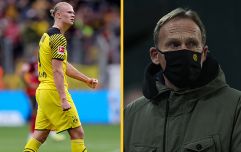 END_OF_DOCUMENT_TOKEN_TO_BE_REPLACED

Despite Sevilla later levelling it up on the night, the damage was done, and Dortmund move on to quarter-finals.

There was, however, a tiny - and slightly hilarious - moment of controversy surrounding Haaland's second.

Brace yourself, this is hard to keep pace with.

Haaland was eventually awarded a penalty via VAR for a foul on him by Jules Kounde. Before it was given, he had the ball in the Sevilla net but was deemed to have committed a foul in the buildup. So this goal was ruled out, but play was brought up for the penalty. 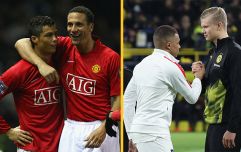 END_OF_DOCUMENT_TOKEN_TO_BE_REPLACED

Having finally stepped up to take the spot-kick, Yassine Bounou saved Haaland's initial shot and his rebound, only for a retake to be ordered after the goalkeeper came slightly off his line.

Bounou was spotted shouting at Haaland after his double save, something which the Norwegian remembered after tucking away his second attempt. Having found the bottom corner, the striker made a point of screaming at the goalkeeper, angering a couple of Sevilla players in the process.

After the match, Haaland was asked what he shouted at the goalkeeper. The man was so possessed that he started shouting in a different language, which he did not understand.

"The goalkeeper shouted at me when he saved the penalty and I thought, 'Oh, I hope I can score another goal for you. And I did. I have no idea (what he shouted), I said the same thing he said to me. I don't know what it means." 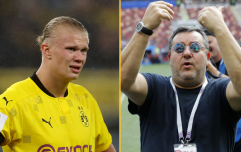 END_OF_DOCUMENT_TOKEN_TO_BE_REPLACED

Haaland ignored the Sevilla player protests in his celebrations, but the sight of them haring after him was a particularly  funny moment nonetheless.

On Virgin Media Sport, Tommy Martin aptly referred to the crazed competitor as a "mad yoke."

"The lad's got the lot," added Damien Delaney.

Niall Quinn, meanwhile, feels that the Norwegian has it all.

"Normally, centre forwards are got at two or three things. But he's good at everything. His presence is phenomenal. He's got defenders worried from the moment Dortmund have got possession."


popular
Alex Ferguson wrote Mickey Harte a letter - ex Tyrone boss reveals in new memoir
Supercomputer makes shocking Premier League predictions
"There are clubs in every county that you just know - they like fighting." - Fighting passes on through the generations
"I'll go back running the roads now and make sure my body doesn't get lazy"
“How it finished was not the way I would have chosen" - Mickey Harte reveals how his time with Tyrone came to an end
Steve Bruce hits back at journalist during press conference after question about his future
GAA at its best as Bellaghy players run into team-mate who buried his father that morning
You may also like
6 months ago
Even match officials fawning over Erling Haaland as linesman gets his autograph
6 months ago
How a small club in Norway led calls for their country to boycott the Qatar 2022 World Cup
4 days ago
Undeniable truth: Why Karim Benzema deserves a Ballon d'Or
4 days ago
Marcus Rashford says he is 'in a much better place physically and mentally'
4 days ago
Paul Ince accuses Solskjaer of 'blatantly lying' to Donny van de Beek
4 days ago
The FootballJOE Pub Quiz: Week 9
Next Page