A classy move from Ronny

Much was made of this year's UEFA men's Player of the Year gong, with Real Madrid and Croatia midfielder Luka Modric eventually picking up the coveted award after an incredible season for club and country.

First, there was a bit of a public outcry following UEFA's decision to leave Lionel Messi off the three-man shortlist, as he lost out to Liverpool's Mo Salah despite winning La Liga and finishing as the top goalscorer in Spain. In actual fact, he wasn't even close to making the top three, placing fifth in voting behind Atletico Madrid's Antoine Griezmann. 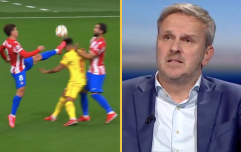 END_OF_DOCUMENT_TOKEN_TO_BE_REPLACED

Then there was more of a personal grievance from superagent Jorge Mendes, the man who brokered Cristiano Ronaldo's record-breaking move to Italian giants Juventus in the summer, who called it "shameful" that his client didn't take home the award.

Ronaldo, meanwhile, reportedly 'snubbed' the ceremony itself, despite actually winning the prize for Best Attacker in the Champions League at the event in Monaco.

Along with Messi, he's had to attend practically every football award ceremony for the last decade. I mean, come on. Give him a break.

Whilst it was easy to interpret Ronaldo's no-show as an act of defiance at the outcome of the voting, it appears that - shock - Cristiano might not actually be the monster he is made out to be, and actually sent his former teammate of six years a rather lovely text message to congratulate him on the well-deserved recognition.

Modric spoke Portuguese TV channel RTP3 after Croatia's friendly with Portugal ended in a draw on Thursday and said:

"I am happy to be in another big award final [FIFA's The Best], we'll see what will happen.

"'Cristiano sent me a message, congratulated me and told me he is happy for me and I deserved it. He also said he can't wait to meet me again."

Modric, Ronaldo and Salah will go up against each other again at the end of the month, with FIFA's The Best awards show taking place in London on September 24.

It would be no surprise, nor an injustice, to see Luka Modric take home that title too.


popular
Spicy Donegal semi-final the highlight of a rip-roaring weekend of GAA on the tv
Shane Walsh: 'That's not how I was coached to play football. No one was coached to play football that way'
"Ah, come on!" - Richie Sadlier and Didi Hamann couldn't even agree to disagree on Griezmann's red
Seven exciting Ireland prospects pushing for November squad inclusion
Derry club win county final factfile games with extravagant set of jobs
"Where Johnny Sexton is so important to us now is being able to pass the baton"
Luiz Felipe in tears after bizarre red card after full-time whistle
You may also like
19 hours ago
Ole Gunnar Solskjaer responds to stinging Jamie Carragher criticism
21 hours ago
Jack Grealish donates £5k towards fundraiser for woman who died in Merseyside car accident
1 day ago
Gary Neville moves goal-posts as he defends 'club legend' Ole Gunnar Solskjaer
1 day ago
Marcus Rashford's camp reportedly upset by Solskjaer's over-reaching comments
1 day ago
England receive Wembley Stadium ban following Euro 2020 final debacle
1 day ago
Man United aren't good enough to accommodate Ronaldo's refusal to work
Next Page