Watford will end the season having had four managers in charge

Watford FC are set to relieve Nigel Pearson of his duties as manager, according to numerous reports.

There are just two games of the season remaining for the Hornets, but Pearson will not be in the dugout as they fight to avoid relegation as he did at Leicester in 2015.

Pearson's replacement will be Watford's fourth manager this season, after Javi Gracia, Quique Sanchez-Flores and Pearson himself.

Watford are currently 17th, three points clear of Bournemouth in 18th, but play Manchester City and Arsenal in their two remaining games.

Losing their last game 3-1 to West Ham without putting up much of a fight has proved to be the final straw for the Watford board. 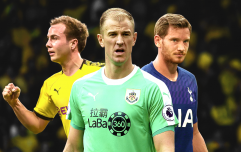 END_OF_DOCUMENT_TOKEN_TO_BE_REPLACED

The highlight of Pearson's time at Vicarage Road will be beating Liverpool, ending their unbeaten run.

According to the Athletic, former Ireland under-21 goalie Graham Stack will take charge of their final two games of the season in a caretaker capacity alongside former Reading, West Ham and Portsmouth player Hayden Mullins.


popular
The SportsJOE 12 o'clock quiz | Day 134
"It's not about winning at underage. It's about building players and building people"
"Me and him used to room together, and he was a bit of a nightmare"
Excitement in Mitchelstown as Cork man set for AFL debut at 20
The SportsJOE 12 o'clock quiz | Day 133
A starting XI of the best free agents available this summer transfer window
Here's how much Shane Lowry earned for an excellent, if ultimately disappointing, weekend at Oakmont
You may also like
3 days ago
Inter Milan 'agree personal terms' with Alexis Sanchez
1 week ago
Can you name every English football league club that begins with 'P'?
1 week ago
Best players since Premier League restart won't feature in PFA awards
1 week ago
The ultimate Messi vs. Ronaldo quiz will finally settle some scores
1 week ago
'Henderson is conceding goals he'd be getting slaughtered for if he was at Man United'
1 week ago
Dejan Lovren on verge of leaving Liverpool
Next Page