With most Premier League sides reaching, or nearing, the 19-game mark, it was time for Gary Neville and Jamie Carragher to revisit their predictions from August.

At the start of the league season, the pundits made their predictions for teams and players, as well as picking their 'top four'. Following the MNF coverage of Newcastle United's draw with Manchester United, both lads got stuck in.

END_OF_DOCUMENT_TOKEN_TO_BE_REPLACED

Four months into the Premier League season and Carragher's predictions were looking much better. Both men have Manchester City as their predicted champions but the former Liverpool defender's likely top four has Chelsea and Liverpool next, with Manchester United in fourth. He also called Mo Salah for top scorer and Arsenal's Emile Smith Rowe [pictured below] as 'young talent'.

Carragher's only really whiff was Jadon Sanho, who has endured a shaky start at Manchester United, as his 'one to watch'. For Neville, though, his predictions were not looking so hot. 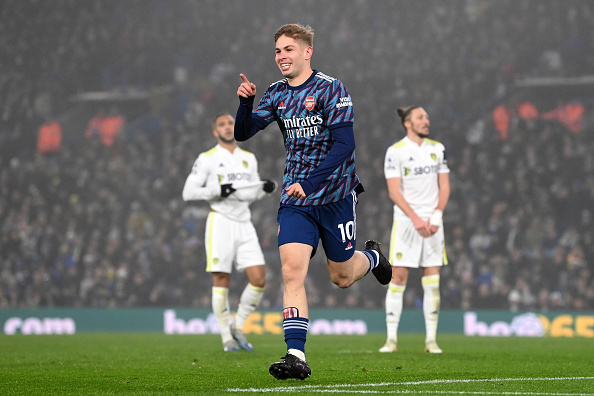 Gary Neville on his pre-season prediction about Arsenal

END_OF_DOCUMENT_TOKEN_TO_BE_REPLACED

When it came to go back over Neville's predictions, the ones that jumped out were Raphael Varane as 'one to watch' and Everton as 'overachievers'. Both the French defender, who has struggled with injuries, and 15th placed Everton have struggled.

Romelu Lukaku as predicted top scorer was looking good a few weeks into the season, but he has had injury issues. He had United down to finish third, ahead of Liverpool. For 'underachievers', he picked Arsenal, who are currently in the fourth after a good run under Mike Arteta.

"To be honest with you," he began, "with Arsenal, you can flip a coin with them.

"In three weeks, you could be talking about Arsenal [in another way] but, at the moment, I would say they are doing as they should be, but they could still let you down in a few weeks. They are not someone you could trust wholly."

So achieving, for Neville, but not over-achieving right now.

The punditry pair had a chance to review some predictions. Carragher bumped United out of his top four, for Tottenham, but Neville stuck to his guns.

Remember those August predictions? 👀@Carra23 and @GNev2 take a look at how the Premier League season is unfolding and discuss any changes to their predictions for champions, top four teams and relegation survivors 🔮 pic.twitter.com/BjmYL1QLGH

Carragher did argue that he had Sancho as his 'one to watch' as he was not entirely convinced of him, from what he saw in the England jersey, and he wanted to see more of him in the Premier League.


popular
Damien Comer targeted in brutal, chaotic Armagh and Galway brawl
Roy Keane makes good on bet after seeing Cork fall to Dublin
Shane McGuigan does a 'Sueey' Cristiano Ronaldo would be proud of after winning MOTM
Conor Gleeson's gesture to heartbroken Ethan Rafferty a tonic after sideline brawl
Liverpool set £60m Mo Salah price as contract talks continue
Malcolm Ebiowei 'ignored Erik ten Hag text' before signing for Crystal Palace
"I have decided to stay in Ireland" - Oisin Mullin gives Mayo fans the news they have been praying for
You may also like
5 days ago
Josip Juranovic may depart Celtic as Premier League clubs chase transfer
5 days ago
Rio Ferdinand on the four Man United players who could be sold this transfer window
6 days ago
Glenn Whelan highlights Rory Delap's importance under 'Pulis-ball' at Stoke City
6 days ago
Burnley name their price for Nathan Collins with two Premier League clubs interested
1 week ago
Chelsea ready to 'make move' for Raheem Sterling
1 week ago
Investigation launched into Granit Xhaka booking after huge bet placed
Next Page