Gary Neville has claimed that Manchester United are 'not enough of a team' to win the Premier League title, but has also suggested that they have to win a trophy in the next 12 to 18 months.

Ole Gunnar Solskjaer's side lost their third game in four on Saturday when they were defeated by Aston Villa at Old Trafford.

END_OF_DOCUMENT_TOKEN_TO_BE_REPLACED

The Red Devils conceded late as Kortney Hause's 88th minute header secured a 1-0 victory for the away side, before United missed the chance to level the score in injury-time as Bruno Fernandes smashed his penalty high over the crossbar.

The defeat came at the end of what has been a disappointing 11 days for Solskjaer's men, who lost 2-1 to Young Boys in their Champions League opener, exited the Carabao Cup after a home defeat to West Ham and suffered their first league loss of the season on Saturday afternoon.

Although United did beat the Hammers in the Premier League prior to their cup exit, Neville has suggested that their loss to Villa at the weekend shows that they don't play well enough as a team to win the league.

🗣️ "When I look at Chelsea and Liverpool and City, they're teams."

"I think you have to be a unit in and out of possession, and when you only deliver in moments, those moments won't go for you in certain games.

"You need patterns of play, you need a way of playing, and at this moment in time I still see a group of individuals playing in moments, with some patterns and combinations at times, but still a team where some are pretty new together - Cristiano Ronaldo, Raphael Varane, Jadon Sancho - but they've got to come together as a team and start to define a style of play.

"Then you start to get results when you don't play well." 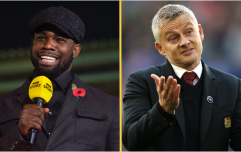 END_OF_DOCUMENT_TOKEN_TO_BE_REPLACED

The 46-year-old then went on to discuss the consistency of his former side, labelling them the 'odd bunch' because of their ability to lose a number of games in a row before going on a lengthy unbeaten run themselves.

"The way they are at the moment, they'll always have days like Saturday against Villa," said Neville. "They'll have patches of four or five games where they only win two, but then they'll go and win 15 on the bounce and be unbeaten away from home for a while.

"That's the type of team they are. I have called them the odd bunch, because I still look at them and think of them as a team who win games in moments."

Bruno Fernandes missed only his second penalty in normal time for Man Utd against Aston Villa at the weekend. (Photo by Gareth Copley/Getty Images)

Neville - who made 400 Premier League appearances for the Red Devils - also compared United with their title rivals, insisting that by signing the calibre of players that they have done over the summer, trophies need to follow.

"I look at Chelsea, Liverpool and Man City, they are teams - they put team performances in," he said. "That's not to say United never do, but Ole now has to get United into a team.

"I said two weeks ago that the Ronaldo signing was make or break. That's not me putting pressure on the players or manager, it's a matter of fact.

"If you sign Edinson Cavani, Bruno Fernandes, Ronaldo, Varane and Sancho, you've got to then win a trophy at some point in the next 12 to 18 months. This season or next, when Ronaldo is here, that's why it's a make-or-break signing. They have to win a trophy."

During a Twitter Q&A in May, the Sky Sports pundit was asked where he thought United could finish this season with the right signings.

Evidently, United signed two of the players that the Englishman suggested would be influential in the Red Devils' hopes of winning their first league title since 2012/2012, and whilst they didn't sign Harry Kane - nor even approach Spurs to do so - it is interesting to see Neville's change in opinion so early into the current campaign.

It would be unfair to completely rule the Red Devils out of the title race after just six games, but if they are to properly compete in what looks to be one of the most competitive battles in recent years, then they might just need to follow Neville's advice.


popular
Man United aren't good enough to accommodate Ronaldo's refusal to work
Player manager takes over Naas just days before county senior semi-final
Andy Farrell's Ireland squad for November internationals to feature some exciting talents
"I won't let that happen!" - Peter O'Mahony riled up by Connacht star
Luiz Felipe in tears after bizarre red card after full-time whistle
Outrageous scenes as Glentoran 'keeper attacks his own team-mate in moment of madness
The FootballJOE Pub Quiz: Week 10
You may also like
2 days ago
Solskjaer gamble on Harry Maguire backfires in most horrendous way
2 days ago
UEFA reduce Aaron Wan-Bissaka's Champions League ban after review
3 days ago
Alex Ferguson wrote Mickey Harte a letter - ex Tyrone boss reveals in new memoir
4 days ago
Jesse Lingard opens up on injury and mental health struggles
4 days ago
David Beckham opens up on truth behind boot incident with Sir Alex Ferguson
1 week ago
Marcus Rashford says he is 'in a much better place physically and mentally'
Next Page