Gary Neville apologises for his commentary during Burnley vs Man United

'I will be better Sunday'

Gary Neville has tweeted an apology for his commentary during Tuesday night's Premier League game between Burnley and Manchester United.

The former United captain was co-commentating on the game for Sky Sports, and saw his old side move three points clear at the top of the Premier League thanks to a 1-0 win. However, some United fans on the social media platform accused Neville of overcompensating for his associations with the club by suggesting some key decisions in the game should have gone against their players.

END_OF_DOCUMENT_TOKEN_TO_BE_REPLACED

The game - particularly in the first half - was not without controversy. A bizarre sequence of events which began with referee Kevin Friend waving play on after a Luke Shaw challenge on Johann Berg Gudmundsson was quickly followed by a foul on Edinson Cavani at the other end. The Uruguayan had been brought down just outside the Burnley box by Robbie Brady, Burnley's last man. Whereas some expected a red for Brady, Friend issued a yellow, then rescinded it after checking a pitch-side monitor and ruling Shaw's challenge seconds earlier was worthy of a booking.

Some - Neville included - felt Shaw could have easily been given a red card for the challenge, clearly catching Gudmundsson after initially taking the ball.

Moments later Harry Maguire was denied what appeared to be a perfectly legitimate goal when he was deemed to have made a foul when heading a Shaw cross in at the back post. In the closing stages the defender was also the subject of a VAR review for a potential handball in his own area, with Neville suggesting he could have been "in trouble" for the incident, which was eventually deemed not worthy of a penalty. 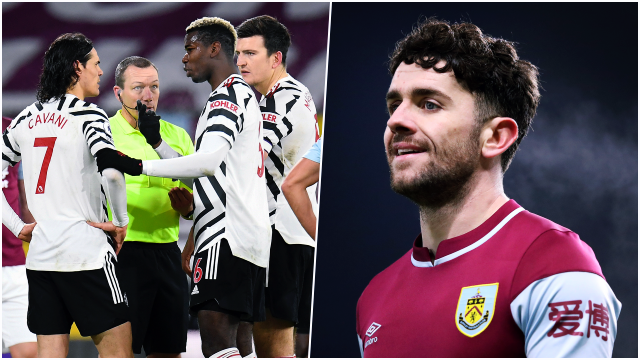 END_OF_DOCUMENT_TOKEN_TO_BE_REPLACED

With his name trending on Twitter in the hours after full-time at Turf Moor, Neville apologised, blaming his commentary on a mix of confusing VAR calls and hearing the news that his Salford side had snatched a last-gasp win away at Scunthorpe. He promised his commentary would be much improved when United travel to Anfield on Sunday to face Liverpool.

'Apologies for the commentary tonight,' his tweet read. 'Stockley park all over the place, producer in my ear saying Salford have scored in the 92min and United gone top of the league! Delirious! I will be better Sunday.'

Apologies for the commentary tonight ! Stockley park all over the place , producer in my ear saying Salford have scored in the 92min and United gone top of the league ! Delirious ! I will be better Sunday 👍🏻

END_OF_DOCUMENT_TOKEN_TO_BE_REPLACED

United head to Anfield on Sunday with a chance to stretch six clear of Jurgen Klopp's side, if they can get another away win. For Ole Gunnar Solskjaer, he faces a few interesting selection choices - most notably whether to bring in Fred or Scott McTominay, or both, at the expense of someone like Paul Pogba.

Klopp will face a big call about his defence, with Fabinho and Jordan Henderson dropping back to fill in there in recent games.