Sancho has struggled to impress since his move to United

England boss Gareth Southgate has admitted Jadon Sancho was lucky to be named in his squad for the upcoming World Cup Qualifiers.

The 21-year-old has struggled to make an impact since his big-money move from Borussia Dortmund to Manchester United in the summer, failing to register a goal or an assist in his first eight appearances.

END_OF_DOCUMENT_TOKEN_TO_BE_REPLACED

Southgate confessed that while he is aware that Sancho's current form probably doesn't warrant a call-up to the England squad, he has done so to avoid adding to Sancho's concerns while he adapts to life in the Premier League.

He said: "Does he deserve to be in on these performances over the last few weeks? Well, probably not, but we have invested in Jadon over a period of time.

"We believe he can get to a high level. I’d like time to chat with him and help that process that’s going on at United. For him to feel that we have belief in him, at this point, is a good message. So, again, there is no perfect solution here."

Sancho's move from the Bundesliga side Dortmund caused great waves of excitement but he is yet to replicate the form that had him labelled as one of the most promising young players in the world. 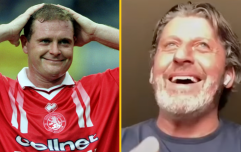 END_OF_DOCUMENT_TOKEN_TO_BE_REPLACED

Southgate knows that it will take time for the youngster to get to grips with Premier League football.

"The Bundesliga is totally different," said Southgate. "Dortmund is a big club but Manchester United is one of the biggest in the world. There’s a definite adaptation to the league. You’re not going to get anywhere near the goals and assist numbers in our league that you are in the Bundesliga.

"There are some very good teams but also it’s a good league for young players to develop because there are some teams that aren’t at that level. In our league, every game is intense and tough and he’s probably just starting to realise that."


popular
Jurgen Klopp reacted like everyone else to Darwin Nunez headbutt red card
Jamie Carragher on the two Man United players Erik ten Hag can't trust
"I went up to the Italians and gave them a big auld shoulder" - Paul O'Donovan does it again
Carragher and Neville brutally name Man United's biggest transfer flops since 2013
Man United have 'decided to sell' promising midfielder James Garner
Wexford Under-20 lights it up as Ferns win their first ever county title
Graeme Souness under fire for calling football a ‘man’s game' while sat with Karen Carney
You may also like
1 day ago
Thomas Tuchel explains what sparked hand-shake scenes with Antonio Conte
1 day ago
Declan Rice apologises after Dean Henderson makes penalty save admission
1 day ago
"I can't see any dive there" - When Roy Keane was victim of a dreadful call against Liverpool
1 day ago
"I will not admit that" - Erik ten Hag irked by press conference question about his tactics
1 day ago
Wexford's Festy Ebosele makes Serie A debut at San Siro, and goes in hard on Divock Origi
2 days ago
Gary Neville highlights Erik ten Hag decision that 'backfired spectacularly' at Brentford
Next Page