De Jong has been linked with a move to Stamford Bridge

Frenkie de Jong has reportedly told Chelsea that he favours a move to Manchester United in a fresh blow to the Blues' transfer hopes.

Chelsea have joined the race alongside United for the Dutch international's signature and have allegedly offered Marcos Alonso and Cesar Azpilicueta to Barcelona in order to move ahead in the queue to sign the 25-year-old.

However Marca have reported that De Jong told Chelsea owner Todd Boehly that he is not interested in a move to Stamford Bridge and only wants to join the Red Devils. 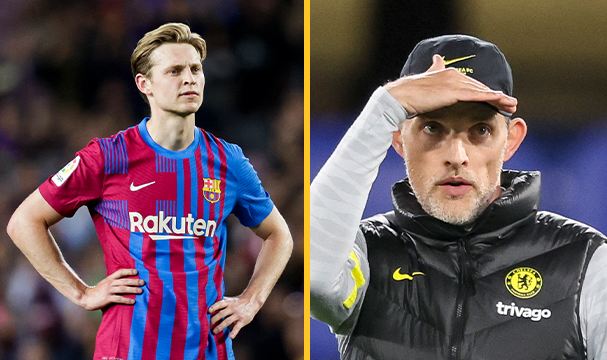 Erik ten Hag has made the Barca midfielder his number one target this summer but a move to link up with one of his former Ajax players doesn't seem to be reaching a conclusion any time soon.

END_OF_DOCUMENT_TOKEN_TO_BE_REPLACED

De Jong is currently owed £17.3m by the Catalan giants in deferred wages and bonuses after he agreed to take temporary pay cuts to help the club with their financial state during the covid pandemic.

Further reports have suggested that Barca have offered De Jong £2.9m in wages and for the 25-year-old to waive the outstanding payments so that the move can go through.

United have already made one signing this summer after they brought in Tyrell Malacia from Feyenoord to help bolster their full-back position.

The Red Devils also have an agreement in place with Christian Eriksen to join on a three-year deal however Brentford have hopes that the Danish international will commit to signing a new contract with the Bees.