Anyone who played Championship Manager or Football Manager back in the day will be familiar with Javier Saviola.

In fact, anyone who has kept up to date with real-life football since the turn of the century will at least have heard the Argentina international's name.

The former River Plate youngster, once a team-mate of Juan Pablo Angel and Pablo Aimar in his home country, has done the rounds since moving to Europe with Barcelona in 2001.

Since then, the forward has played - and scored - for Monaco, Sevilla, Real Madrid, Benfica, Málaga, Olympiacos and Verona, as well as turning out for his country at the 2006 World Cup.

But his latest move couldn't have been predicted by too many people. Now 34 years of age, Saviola has rocked up at Andorran club FC Ordino in a coaching role.

Ordino finished sixth of eight clubs in last season's Andorran Primera Divisió, and have enlisted the help of Saviola to initially help with their youth and reserve teams, Marca reports.

None of their crowds this season - home or away - will be greater than 1,500: that's the size of the largest club stadium in the European principality. In fact, the population of Andorra - just over 85,000 - would fit into Barcelona's Camp Nou with space to spare. 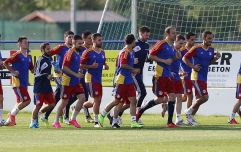 END_OF_DOCUMENT_TOKEN_TO_BE_REPLACED

The club reportedly hopes he will eventually move on to work with the first team, which is managed by Miguel Ángel Lozano - a former Barcelona youngster who floated around La Liga and the Spanish lower-leagues during a playing career which has lasted more than two decades.

Saviola retired from football after ending his second River Plate spell in January, but Mundo Deportivo reports that a playing return is not completely out of the question.


popular
Referee Mathieu Raynal puts Sexton in his place after TMO mess
Sexton compares "brilliant" Irish debutant Craig Casey to Jonny Wilkinson
Tadhg Beirne now delivering what so many of us knew he was capable of
The SportsJOE 12 o'clock quiz | Day 308
Will Connors locks down No.7 jersey with two rapid succession plays
"I was like, ‘My ear is hanging off my head. Can you not see that?!'"
Owen Farrell rages at referee Pascal Gauzere as Wales catch England sleeping
You may also like
1 week ago
The SportsJOE 'Who Scored More' Quiz | Part 2
1 week ago
Jurgen Klopp and Seamus Coleman exchange words as Everton beat Liverpool
1 week ago
Ruthless Thomas Tuchel says he substituted Callum Hudson-Odoi over his body language
1 week ago
Patrick Bamford takes to Twitter and blasts VAR decision after Wolves defeat
1 week ago
Wilfried Zaha becomes first Premier League player vowing to stop taking a knee
1 week ago
Arsenal chief executive hits out at social media giants for double standards on racism
Next Page