It's the age old debate

Gerrard or Lampard? Lampard or Gerrard? It is the footballing debate that dominated a decadea and actually posed more questions than it answered. As Liverpool and Chelsea repeatedly met in the latter stages of Europe and competed for domestic trophies, their talismanic midfielders naturally became the centre of the discussion. Both brilliant, but different midfielders, there was never a consensus on who was the superior footballer.

FIFA have tried to fix that on the next instalment of the video game, which will be released this autumn. On FIFA 19, the legendary ex-players will have legends cards on Ultimate Team that reflect the players' abilities at the peak of their careers. Going by their ratings, Steven Gerrard was the better player, just. 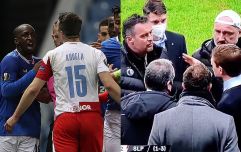 END_OF_DOCUMENT_TOKEN_TO_BE_REPLACED

He has been given an overall rating of 91, while Lampard received just 90. Gerrard's pace, dribbling, defending, passing and physicality are all slightly better than Lampard's according to these ratings. It's a shame for Lampard that there isn't a trait on the card named 'well timed runs into the box' or 'penalties smashed to the 'keeper's right' - he would surely be given 100 for both of those.

Liverpool fans will be pleased to see that their most iconic player of all time has been given the higher rating, but it should be acknowledged that there is only a minimal difference between the two players.

But that won't stop them from lauding it over Chelsea fans as a victory. There is no love lost between these two fanbases and they will take every opportunity to get one over each other.


popular
The most Stone Age tackle you've ever seen gets South African lock straight red card
Galway fans' frosty reception for Davy Fitz doesn't make any sense
Michael Schumacher paralyzed and suffering from memory and speech problems
"Johnno went, 'We’re not moving! You're trying to mess us about!'" - Ben Kay recalls red carpet controversy
Ryan Manning hacked to the ground by Henri Lansbury in ruthless assault
'Brian was a genius... he would've killed you to even win a game of touch'
"20 seconds of lunacy" sees Joao Felix red-carded against Athletic Bilbao
You may also like
6 months ago
Steven Gerrard could miss Rangers' title winning game after red card
1 year ago
"Can you hear that? They still believe in us. We have to give them something back"
2 years ago
"He deserves his ban and he's got everything to do to get back into my team"
2 years ago
Steven Gerrard ridiculed for 'brutal truth' about Celtic league win
2 years ago
Fernando Torres names the best player he's played with during his career
2 years ago
Garth Crooks claims Celtic should ditch Neil Lennon and appoint a "winner" like Steven Gerrard
Next Page