Ferran Torres cut an emotional figure at full-time of Barcelona's 1-1 draw with Napoli in the Europa League on Thursday, despite scoring in the match.

Piotr Zieliński opened the scoring for the away side in the 29th minute, but January signing Torres levelled proceedings with a penalty after Napoli defender Juan Jesus handled Adama Traore's attempted cross. 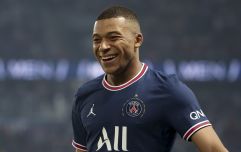 END_OF_DOCUMENT_TOKEN_TO_BE_REPLACED

Barcelona looked the most likely the grab a winner late on, but the points were shared in the Europa League round of 32 first leg tie.

Despite scoring his second goal for the Blaugrana, the former Manchester City man was visibly distraught at the final whistle and had to be consoled by his teammates.

The forward had a golden chance to win the game late on... pic.twitter.com/kQrBZLl8rk

Torres was seen with his head in his hands before wiping his eyes with his shirt, which itself caused controversy as it didn't feature the Nike logo or the Barcelona badge.

The Spaniard missed a couple of good chances in the tie, most notably in the final few minutes. The 21-year-old clearly thought that he had let his team down.

However, manager Xavi was keen to defend the attacker and compared his situation to Luis Suarez's early struggles at the Camp Nou.

"It happened to Luis Suarez, who seemed to have no goals," Xavi said post-match, as per Goal.

"The Barca shirt weighs a few kilos more. But I am delighted to have him in the team and he will give me a lot of joy.

"If he is in the penalty area it is because he will score. He has scored goals all his life and he will have them.

"In training he is one of those who scores the most. He has our absolute trust. The coaching staff and I will take care of this. He is very strong, self-demanding."

Former Barcelona captain Carles Puyol also voiced his support for Torres, tweeting that the player "will give us a lot of joy".

Xavi's men return to league action at the weekend when they face-off against Torres' former side Valencia, before travelling to Naples for the second leg on February 24.


popular
QUIZ: How many of the 10 most successful football counties can you name without making a mistake?
Matt Le Tissier says he asked Sky Sports why they never sacked Jamie Carragher
Éamonn Fitzmaurice explains Aidan O'Shea's best position and how it can be used against Kerry
Conor McGregor and Floyd Mayweather 'in talks' about a rematch
Ex-Real Madrid defender reveals he used to turn up to training drunk
Patrick Vieira claims he was 'much better' than Roy Keane in new interview
Two All-Ireland quarter-finals to be streamed exclusively live on NOW
You may also like
14 hours ago
Oisin McConville believes that "Armagh can win the All-Ireland" for first time since 2002
2 days ago
Ex-Real Madrid defender reveals he used to turn up to training drunk
6 days ago
Man United CEO Richard Arnold meets fans in pub to stop Glazer protest
6 days ago
Real Madrid planning to activate huge Erling Haaland release clause
6 days ago
Christian Eriksen 'wants to remain in London' in blow to Manchester United
1 week ago
Carlos Tevez could be about to land his first management role
Next Page