That backline are on fire.

The Fantasy Football is one week old and some of you are probably thinking of packing it all in already.

Others, though, will be smugly thinking 2018/19 is definitely your year.

END_OF_DOCUMENT_TOKEN_TO_BE_REPLACED

Manchester United kicked off the Premier League season, on Friday, with a win over Leicester and we marvelled at 'Garry's Bell Ends' selecting Luke Shaw as triple captain. Considering that it had been 133 professional games without a goal, it was a brave punt that paid off when Shaw netted the winner at Old Trafford.

This is the single most insane thing we’ve ever seen in FPL!

Someone used their triple captain bonus. On the very first match of game week 1.

The thin line between genius and madman has been well and truly blurred 🤯#fpl #qkwhs #lukeshaw pic.twitter.com/aUbH3Agunx

If that was good, 'Comeback SZN' was even better.

Managed by Alex Baleanu, Comeback SZN are leading the way after Week One of the Premier League's Fantasy Football.

The team are top of the pile with a whopping 137 points and there are some inspired choices in there:

All was going well until Aleksandar Mitrovic and Sergio Aguero were in action. Mitrovic lined out for Fulham in their 2-0 loss to Crystal Palace while Aguero featured in Manchester City's 2-0 win over Arsenal that was more one-sided than the scoreline suggested. 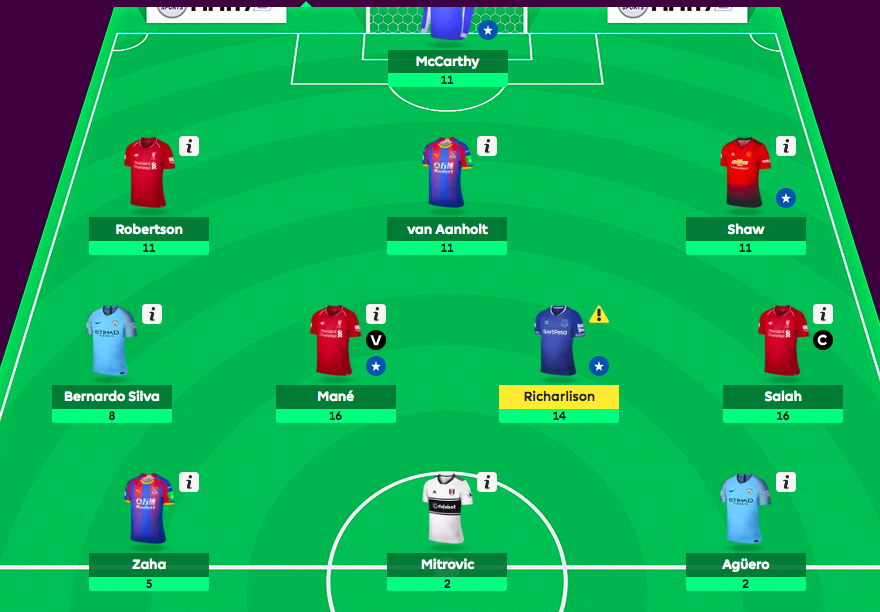 Still, 137 points is some going for one weekend's of Fantasy Football action.

Right now, Baleanu is the player to catch.