Many football fans struggled to believe what they were seeing as 5-foot-11 Christian Eriksen sidled up to 6-foot-5 Erling Haaland as Manchester City prepared to whip in a corner kick.

Haaland went into the Manchester derby with 14 goals in his first 10 appearances for the club, and two hat-tricks in his last two league outings.

He had already gone close with an early effort but, with United already trailing 1-0, an ankle injury to Raphaël Varane saw the visitor's 'Plan A' for set-pieces go out the window.

🗣️ "There is no stopping him!" 👊 pic.twitter.com/KglxEiW6Mw

Erling Haaland gets jump on United

END_OF_DOCUMENT_TOKEN_TO_BE_REPLACED

If there was one crumb of comfort for Manchester United supporters, after another chastening derby day, it was Erik ten Hag confirming that he was as surprised as most of us that Eriksen had been set the task of stopping Erling Haaland for that 34th minute corner.

Asked, following his side's 6-3 drubbing at the hands of City, if the pre-match strategy had been for the Dane to mark Haaland at set-pieces, ten Hag replied:

"It was Rapha Varane that was out. Maybe you saw it, I saw it. We missed one. An important one because of injury."

For the City set-pieces, ten Hag had appeared to be playing a mix of zonal and man-to-man marking. The Dutchman wanted to station four players across his six yard box, with his midfielders keeping close to dangerous options like Haaland, Manuel Akanji and Nathan Aké.

END_OF_DOCUMENT_TOKEN_TO_BE_REPLACED

When Varane was off getting treatment on his injured ankle, Scott McTominay was brought back to the six-yard line, in place of the Frenchman. That left Eriksen and Marcus Rashford to mark Haaland and Akanji. McTominay or Diogo Dalot - two of United's taller, more robust players - should have been tasked with man-marking Haaland, and they paid the price.

The two City players easily got away from their markers and both had a run at the in-swinging corner. In the end, it was Haaland that nutted home his first of the day, despite the best efforts of Tyrell Malacia on the goal-line. 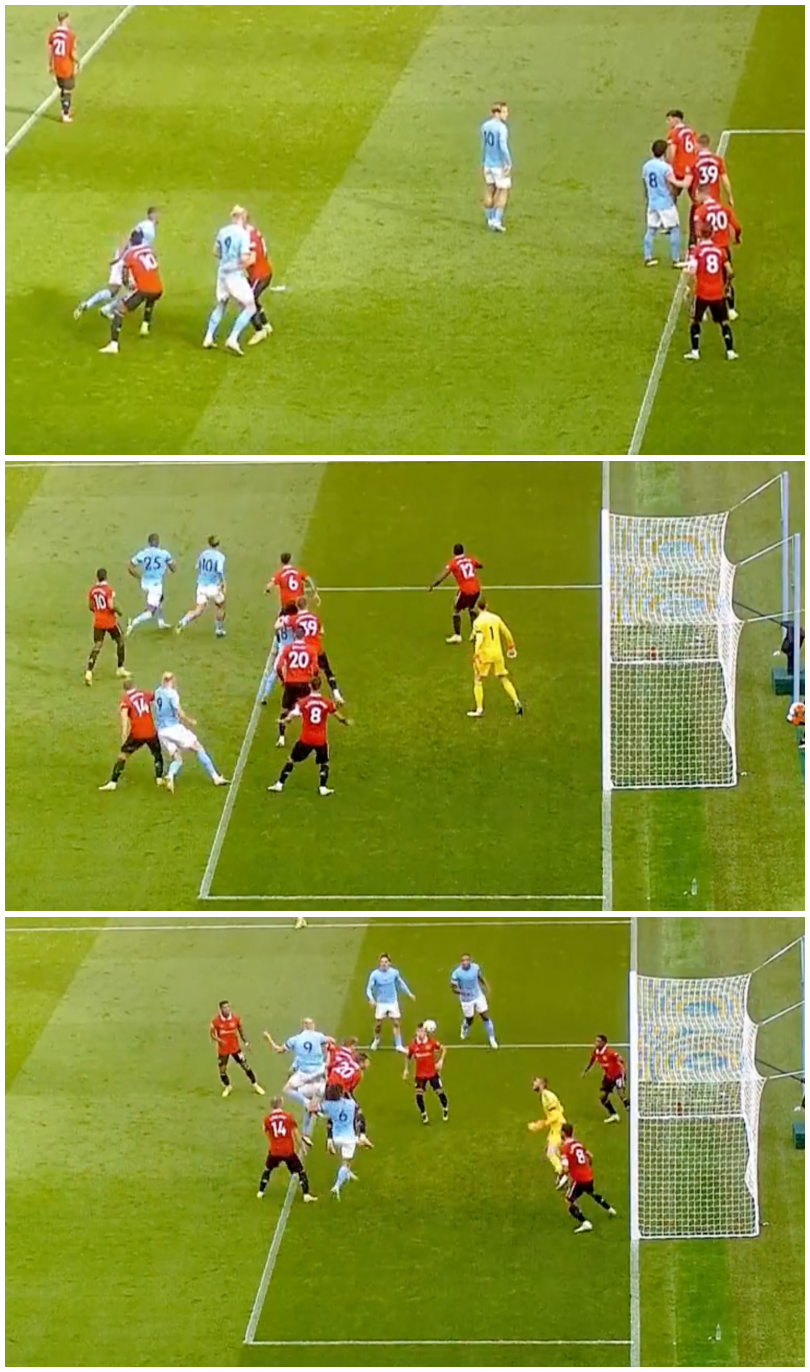 The Manchester United boss bristled when asked if his side had a clear plan to deal with Erling Haaland, who ended up bagging a hat-trick in the 6-3 win.

"When you don't bring belief on the pitch you can stop talking about everything else," Ten Hag explained in the post-match press briefing.

"Yes [we had a plan], as a team, to defend. And I try to explain that you have to be front foot and you have to be good in possession and when you don't do that well, two elements of football, the opponent is dictating, is dominant, enters the box and strikers like Erling Haaland have a threat, clear."