That is an expensive bloody point.

The Republic of Ireland have drawn 0-0 at home with Wales but, a night that struck the right notes early on with the tributes to the late Ryan McBride, finished on a sour note as captain Seamus Coleman suffered an horrific injury. 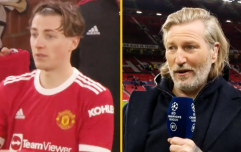 END_OF_DOCUMENT_TOKEN_TO_BE_REPLACED

With the 28-year-old lying stricken on the Aviva Stadium turf, his team-mate Shane Long came over and gave him a hug.

This moment just summed up how horrific and serious the challenge was.

It also shows the incredible level of comradery and companionship which exists in this Irish squad.

It seems everyone in the whole country were just outraged at the reckless tackle.

Sincere Best wishes,Seamus Coleman-unquestionably one of the most charming & warm people in Irish sport -a top role model.@FAIreland #COYBIG

Neil Taylor was reckless. Seamus Coleman was helpless.I wish him the speediest recovery.#IRLWAL

So sad to see Seamus Coleman's injury... LOVE him as a footballer and a Irishman.#IrevWal

Just saw the horrible injury of Séamus Coleman. My heart is bleeding 😢

Not thinking about the result, the injury to Seamus Coleman is far more important. Looked horrific. Best wishes to him @FAIreland @Everton

Get well soon Seamus Coleman. I love you x #IRLWAL

#IrevWal crying after seeing that tackle, I love Seamus Coleman. Hope it's not career ending but it looks that way


popular
"I remember someone saying, 'This guy's the best of the lot of them. Just wait for him'" - Brian O'Driscoll
Treaty take home record-breaking haul of All-Stars but unluckiest absentee is a Limerick man
Emotional Robbie Savage introduces son Charlie's Man Utd debut while on commentary duty
"I trained with a guy that was born in 2004 the other day. We reckoned Earlsie could be his father!" - Peter O'Mahony
Ronnie O'Sullivan responds after rival says his comments about snooker are a "disgrace"
Nigel Owens on most annoying players to referee (three of them are Irish)
The story of the GAA's greatest ever minor
You may also like
2 days ago
Joey Barton found not guilty of assaulting Barnsley boss Daniel Stendel
3 days ago
"I asked one question and lads slagged the arse off me!" - Johnny Sexton on Roy Keane chat
4 days ago
Divock Origi reveals what Jurgen Klopp said to him before scoring crucial winner
4 days ago
Antonio Cassano reveals Cristiano Ronaldo text messages after TV criticism
4 days ago
Roy Keane defends Stoke and Blackburn despite nasty fan comments
4 days ago
Divock Origi to the rescue after Diogo Jota's absolutely incredible miss
Next Page