Everyone knows Eamon Dunphy is a big fan of Wes Hoolahan so spare a thought for him and all of Wes' fans on the day of his international retirement.

“We're not talking about Wes Hoolahan in Ballon d'Or terms, we're talking about him playing for Ireland” - @ConanDoherty is upset https://t.co/JwPTRWBmMl 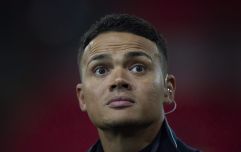 END_OF_DOCUMENT_TOKEN_TO_BE_REPLACED

The RTE pundit has been calling for Hoolahan's inclusion in the Republic of Ireland team since Giovanni Trapattoni's time in charge, and wasn't happy any time Martin O'Neill omitted the Norwich playmaker from his starting XI.

Even when it was revealed that Hoolahan wasn't fully fit to start the game against Poland back in the Euro qualifiers, Dunphy was still angry that the Dubliner was on the bench.

It appears Dunphy has been a fan of Hoolahan for a long, long time.

Even back then Hoolahan was the RTE pundit's favourite player.

When Eamon met Weso. What a pic via @buzzer_rowe10 pic.twitter.com/QXbL0eW82K

The picture looks like it was taken in the mid-1990s, when Wes lived in St Mary's Mansions in Dublin, and played for schoolboy side Belvedere.

Back then, Eamon was a controversial RTE football pundit. How the times have changed.


popular
Solskjaer gamble on Harry Maguire backfires in most horrendous way
José Mourinho swaps Conor McGregor a Roma jersey for some whiskey
"I'll go back running the roads now and make sure my body doesn't get lazy"
Alex Ferguson wrote Mickey Harte a letter - ex Tyrone boss reveals in new memoir
GAA at its best as Bellaghy players run into team-mate who buried his father that morning
Jeff Stelling loses it during Soccer Saturday after Brighton was denied a blatant penalty
"It doesn't look great" - Ulster victory marred by freak Will Addison injury
You may also like
3 years ago
"Embarrassing nonsense" - Eamon Dunphy takes aim at O'Neill after Denmark draw
3 years ago
Eamon Dunphy explains exactly why he fell out with Roy Keane
3 years ago
Eamon Dunphy on Roy Keane: I think Saipan changed him
3 years ago
"Keane is finished" - Eamon Dunphy claims Roy Keane will never get another job in football
3 years ago
Dunphy claims ambush by RTÉ panellists led to him getting a warning
3 years ago
Eamon Dunphy claims Bill O'Herlihy was forced out by RTÉ
Next Page