The end of an era.

Hoolahan has made the decision to retire from international football.

The 35-year-old, who won 43 caps for Ireland, informed Martin O'Neill of his decision last week and says he feels the time was right to step aside.

END_OF_DOCUMENT_TOKEN_TO_BE_REPLACED

The former Shelbourne midfielder was named as a sub for Ireland's 0-0 draw with Greece [Don Givens was caretaker manager at the time]. He did not make it onto the pitch and eventually made his Ireland debut in 2008, at the age of 25, against Colombia.

He played a vital role in Ireland's 2014 World Cup Qualifiers, the road to Euro 2016 and the tournament itself, scoring a cracking goal in the opening game against Sweden. 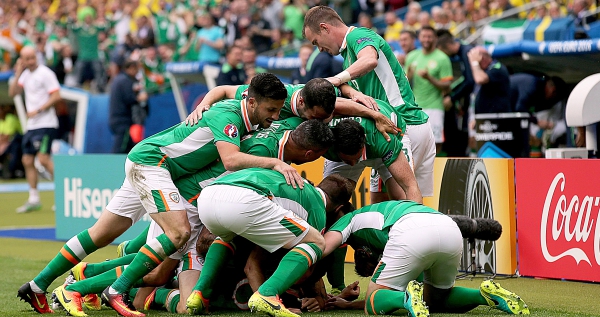 Hoolahan was often used as a sub in Ireland's latest World Cup qualifying campaign and his final game in the green jersey was the playoff defeat to Denmark at the Aviva Stadium.

"It wasn’t an easy decision to make, to retire, but I feel it’s one I had to make and this is the right time to do it,"

"It’s a mixture of things that led me to make this decision but mainly age, I will be 36 soon, I’ll be 38 when the next Euros come around, so it’s time to move aside.

"I had two great campaigns with Ireland and the Euros in France was an amazing experience."

No big social media posts from Hoolahan, just a few words with a trusted reporter to draw the curtain down on a career that brought so much joy to Ireland supporters. Typical of the man, really.

Hoolahan will continue to play on with his club side, Norwich City.


popular
Shane Walsh: 'That's not how I was coached to play football. No one was coached to play football that way'
Spicy Donegal semi-final the highlight of a rip-roaring weekend of GAA on the tv
"Ah, come on!" - Richie Sadlier and Didi Hamann couldn't even agree to disagree on Griezmann's red
Seven exciting Ireland prospects pushing for November squad inclusion
Derry club win county final factfile games with extravagant set of jobs
"Where Johnny Sexton is so important to us now is being able to pass the baton"
Luiz Felipe in tears after bizarre red card after full-time whistle
You may also like
1 week ago
Ireland manager Stephen Kenny admits that "60 to 70% of our best players are defenders"
1 week ago
Claiming Callum Robinson has 'silenced his critics' with goals misses the point
1 week ago
Chiedozie Ogbene gives a brilliant interview after leaving Nemo Rangers behind to chase soccer dream
1 week ago
Callum Robinson performance shows Ireland what could have been
1 week ago
Adam Idah ready to play, but Ireland hit with late blow ahead of Azerbaijan clash
1 week ago
The Ireland XI that should get a much-needed victory in Azerbaijan
Next Page