Comments made by Northern Ireland manager Michael O'Neill earlier this month brought the issue to the fore.

The Democratic Unionist Party (DUP) has called for Football Association of Ireland (FAI) chief executive John Delaney to send out 'a clear message' regarding the issue of 'poaching' Northern Irish-born players.

Five DUP MPS backed a motion calling for the FAI to send out a clear message that "boundary lines will be respected and honoured" while urging the governing body to "play fairly and within the rules."

END_OF_DOCUMENT_TOKEN_TO_BE_REPLACED

Jim Shannon MP tabled the motion and it comes following comments made by Northern Ireland manager Michael O'Neill earlier this month in which he said the FAI uses 'sectarian tactics' by targeting Catholic players to play for the Republic of Ireland.

O'Neill later claimed his quotes were taken out of context and expressed interest in meeting Republic of Ireland manager Martin O'Neill to sort out the issue.

James McClean, Shane Duffy and Darron Gibson are among prominent examples of Northern Irish-born players who have chosen to represent the Republic of Ireland in recent years, having turned out for Northern Ireland at underage levels.

Last year, Michael O'Neill described the actions of the FAI as 'morally poor' after the McEneff brothers, Aaron and Jordan, indicated a preference to switch allegiance from Northern Ireland to the Republic.

Mr Shannon's motion states: "That this House expresses concern over the pursuit of Northern Ireland (NI) born football players by the Football Association Ireland; and calls for the chief executive of the FAI, John Delaney, to send out a clear message that there will be no poaching of NI players, that the boundary lines will be respected and honoured, and that the game will be played fairly and within the rules."

Jeffrey Donaldson, Paul Girvan, Gavin Robinson, David Simpson are the other DUP MPS to have signed the motion. 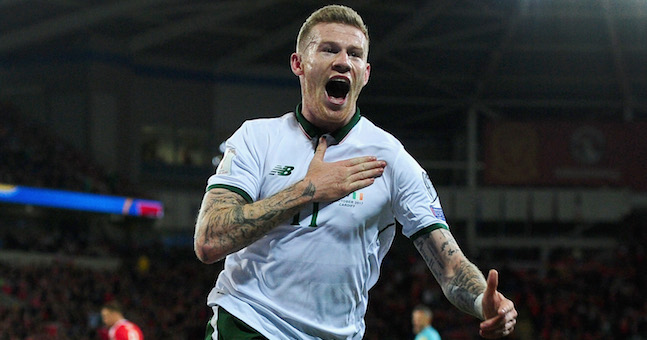 Michael O'Neill's frustration stems from the IFA training players from a young age only to have them taken away before they reach senior level. While the 48-year-old Portadown native understands that some players would wish to represent the Republic over Northern Ireland, he expressed frustration at footballers around the age of 16-18 'having to make a decision on his international future.'

“I don’t have a problem with James McClean who was 22 years of age, he knew what he wanted,” O'Neill said.

“Daniel Devine of Partick Thistle is a West Belfast boy and would have gone to the Euros with us. Only he can’t play for Northern Ireland as he’s signed an international transfer. I can list you 10 players who have made that decision and have never represented the Republic.”


popular
Sean Dyche set to be named Everton manager after Marcelo Bielsa talks break down
Roy Keane flatly rejects longstanding perception of ex-Man United midfielder Paul Ince
Allianz National Football League Round 1: All the action and talking points
Roy Keane leaves ITV pundits in stitches after Pep Guardiola's pre-match interview
Conor McGregor hit by car ‘at full speed’ while cycling
"I don't like to fill my time that way" - O'Hora going his own way in an era of obsessives and covering all bases
Ryan Reynolds makes Premier League promise to Wrexham supporters
You may also like
1 month ago
Roy Keane cracks ice cold Ireland joke after France lose World Cup final to Argentina
1 month ago
Ireland reportedly line up Lee Carsley as next national team manager
1 month ago
Talksport presenter puts Martin O'Neill to the pin of his collar over Declan Rice and Jack Grealish
1 month ago
UEFA fine FAI €20,000 for Ireland dressing room song
1 month ago
The 10 England World Cup footballers who could have played for Ireland
1 month ago
Shay Given on how far Ireland could've gone at the 2002 World Cup with Roy Keane in the team
Next Page