"What is he trying to achieve?"

Without Johnny Giles and Eamon Dunphy not in the RTE studio, and with Liam Brady off punditry duty for Portugal vs. Germany, Didi Hamann took up the curmudgeon mantle.

The former Liverpool and Germany star was in cheerful form - for the most part - after watching Jogi Löw's side beat Portugal 4-2 in their Euro 2020 group game. 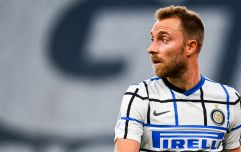 END_OF_DOCUMENT_TOKEN_TO_BE_REPLACED

However, he took exception with one piece of showboating magic from portugal captain Cristiano Ronaldo in the first half.

Not long after putting his side 1-0 up, Ronaldo produced a no-look backheel flick to a Portugal teammate to bamboozle Antonio Rudiger and keep an attack alive. To Hamman, it was nothing more than "nonsense" that would have fired up the Germans.

Speaking after the game, Hamann disagreed with fellow RTE pundit Richie Sadlier. "The German, sitting next to me," Sadlier remarked, "was sucking the life out of the room and said there's no place for that." Sitting forward, Hamann declared:

"I think it's nonsense. He flicks the ball over, pretends he is going to catch it and backheels it across, and looks away... of course it is [amazing] and we know he can do that... I think, in a way he's belittling the opposition."

"If you ask the German players, they'll tell you now what they thought of it. They would have noticed that. I tell you now, all of them will say it may have given us an extra bit of whatever to change things."

After Sadlier stepped in to defend Ronaldo's right to showboat, especially as he kept the attack going.

"What is he trying to achieve?" Hamann cut in. "Maybe this [Germany comeback] is where it all started."

Hamann then rowed back by stating he was not having a go at Ronaldo, the man, after doing the exact opposite for the previous few minutes.


popular
QUIZ: Which is the correct GAA crest?
Andy Moran reveals which former Mayo teammate was the ultimate team player
Paul Galvin is not one bit impressed with the new Kerry jersey
"It’s hard not to respect Johnny, even if you don’t like him!" - Dan Biggar
Ireland Under-17 defender Cathal Heffernan 'in talks' with AC Milan
"I was in the Blackrock end goal looking up to the heavens saying, "Get us through it" - Kerins following his late father's footsteps
Kieran Trippier pinpoints Daniel Levy's biggest transfer mistake
You may also like
4 months ago
Jurgen Klopp pens lovely tribute to Simon Kjaer for Christian Eriksen heroics
4 months ago
Jack Grealish hits back after he's called 'classless' for Villa interview
4 months ago
Jack Grealish reveals he was down to take the 6th penalty vs Italy
5 months ago
Tyrone Mings reveals he struggled with mental health during Euro 2020
5 months ago
Lamont Marcell Jacobs continues Italy's golden summer with 100m win
6 months ago
Police release images of men wanted in connection to Euro 2020 final chaos
Next Page