This might be something of an oversight from Nike.

Nike had specifically designed Tottenham Hotspur's home kit so that the iconic white shirt would fade seamlessly into the navy blue shorts.

Spurs sported the strip for their defeat to Liverpool at the weekend, as they do in every Premier League game, and Toby Alderweireld's badge quirk aside, the kit looked perfect.

But Spurs switched their shorts from navy to white for their clash with Inter Milan this week and the change wasn't exactly easy on the eyes.

Mauricio Pochettino's side conceded two goals in the last five minutes to fall to a defeat at the San Siro and supporters couldn't help but comment on the below kit.

Don't think Nike quite accounted for this Spurs kit combo

Guessing nobody told the guy who designed Spurs’ kit about the whole white-shorts-in-Europe thing. #coys

@museumofjerseys Spurs kit v Inter. On the tv it looks like they are wearing bum bags! Classy....

they didn't design that Spurs kit with Europe in mind, did they?

Sidenote:These Tottenham kits are the worst all whites I've ever seen, but oddly one of the best looking kits when worn with navy shorts that the top fades the white to navy

The gimmick of that Spurs shirt doesn't really work when they're wearing white shorts.

Look at how daft the spurs kit looks when they've had to wear white shorts. 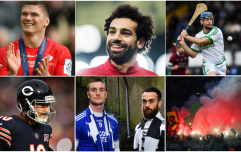 END_OF_DOCUMENT_TOKEN_TO_BE_REPLACED

Spurs led thanks to a Christian Eriksen goal shortly after half-time but Mauro Icardi equalised in the 86th minute before Matias Vecino gave Inter an unlikely win in injury time.

It was the third consecutive 2-1 defeat suffered by Pochettino's side and it certainly sounds like the Spurs boss is feeling the pressure.

"It’s so cruel," Pochettino said. "The team deserved much more and I think that was our best performance since the start of the season. The only way back to winning games is to play in the way we played. It’s not about learning and working on the training ground [on set pieces] – you need luck, too, and the right decision at the right moment.

"At 1-0, the result is always open and the problem was we didn’t kill the game. Samir Handanovic was fantastic in goal in some situations. Of course, the home fans were unbelievable after the equaliser and they helped their team to win the game. We need to improve with some situations.

"I understand football and I understand tough periods can arrive. After our win at Manchester United, I said: ‘Be careful.’ And afterwards, a tough period arrived, starting at Watford. The most important thing is to be strong and we are strong. We’ve shown tonight we will be the same as in the past.

"We have quality and I started to see good signs the team is coming back. We showed great personality. We controlled Inter Milan in the San Siro, a difficult place. We showed big character and we were unlucky not to keep the result we deserved."


popular
SportsJOE 2000s Football Quiz | Round 1
QUIZ: Name these footballers based on their former teammates
The SportsJOE 12 o'clock quiz | Day 69
QUIZ: Name the footballers to have played for Manchester United & Real Madrid
The SportsJOE 12 o'clock quiz | Day 67
"I knew I didn't have the pace or strength, it was just get it and try kick it left or right"
QUIZ: Name every All-Ireland football winner of the last 33 years?
You may also like
2 months ago
In a time where we need sport more than ever, we've never needed it less
7 months ago
Player ratings as Liverpool sparkle in Genk
7 months ago
"He generally gives it away, his final pass has been so disappointing"
7 months ago
Real Madrid are La Liga leaders but remain deeply flawed
7 months ago
Is Robert Lewandowski underrated? Maybe
9 months ago
Pots confirmed for this season's Champions League draw
Next Page