Paul Pogba cops some amount of flak whenever Manchester United drop points or have an off day. Or both.

The French midfielder has not exactly taken the Premier League by storm but has played a key role in the club's top four push and challenge in three cup competitions.

Jose Mourinho has not eased Pogba's work-load one bit as he seeks to keep the team's positive momentum. That decision appears to be backfiring of late as both Pogba and Zlatan Ibrahimovic have been sluggish in recent outings.

END_OF_DOCUMENT_TOKEN_TO_BE_REPLACED

Last night, as United drew 0-0 with Hull at Old Trafford, Pogba took a lot of heat from fans for taking too much off each ball he received and slowing down United's play.

He also came in for a heap of slagging after he came out on the wrong side of a few dealings with Irish international David Meyler. 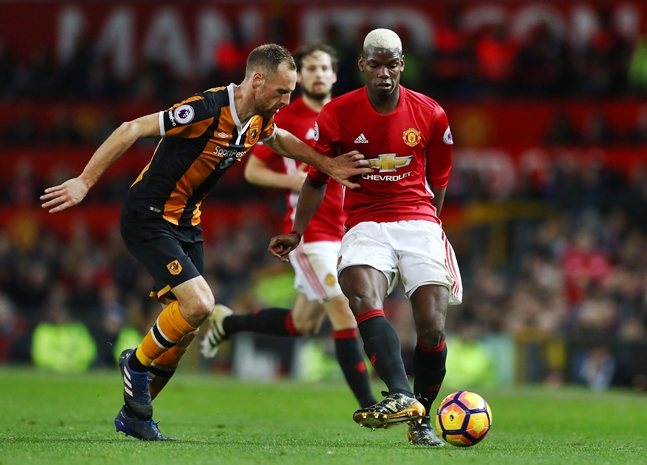 Pogba did leave the Hull defender on his rump at one stage but that was the height of it.

Simply put, Meyler let him know he was in a match and people loved it.

Pogba didn't come up against the likes of harry McGuire and david meyler in serie A, cant blame him for struggling

And when Meyler dropped the shoulder to glide past the £89m man...

Game over and there could only be one winner

Rashford - Didn't cause Meyler any problems

Not a bad way to cap your 100th Premier League appearance

You may also like
2 days ago
Erik ten Hag played key role in Ralf Rangnick's Man United departure
2 days ago
Patrick Vieira claims he was 'much better' than Roy Keane in new interview
3 days ago
Man United transfer troubles continue as Erik ten Hag's budget is 'capped'
3 days ago
Zinedine Zidane explains why he would never manage Man United
3 days ago
Steve McClaren issues warning to Man United players
4 days ago
Richard Arnold: A behind the scenes look at how Man United fans' unlikely meeting with the CEO happened
Next Page