Not many people would have seen this retirement coming.

New Ireland boss Stephen Kenny will have to do without the services of David McGoldrick. A statement on the Sheffield United star reads:

'The 32-year old striker has made 14 appearances for the Republic of Ireland, having made his debut in November 2014 in a 4-1 win over the United States.

'McGoldrick scored his only goal for Ireland in the 1-1 draw against Switzerland in the UEFA 2020 European Championships qualifying campaign at the Aviva Stadium in September 2019.

'His performances during the campaign saw him named as the 'Three' FAI Senior Men's Player of the Year in August 2020.

'The Sheffield United forward has decided to retire from international football to concentrate on his club career and family.

'The Football Association of Ireland would like to thank David for his fantastic service and wish him all the best for the future.' 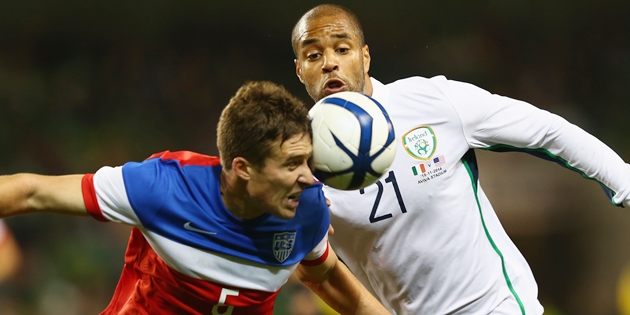 END_OF_DOCUMENT_TOKEN_TO_BE_REPLACED

Ever since he made his Ireland debut, against the USA six years ago, 'Didzy' has proved to be a crafty player and one that was adept at holding up possession and bringing teammates into attacking moves.

As noted in the statement, McGoldrick won the Ireland senior squad's best player award, earlier this year, and he was superb, albeit in a losing cause, against Slovakia in the Euro 2021 Playoff Qualifier, in October.