Contrary to popular belief, David Luiz is a defender. With that in mind, he's not expected to start attempting any acrobatics in the opposition's box.

But with his side leading Leicester courtesy of Diego Costa, that's *exactly* what the Brazilian thought he'd try and do.

Up for a set piece, Luiz found himself needing to improvise as the ball looked to be heading out for a goal kick.

Up he went, completely missing the ball.

And then down he went, looking a bit silly.

Rounding it off with a comedy face plant of a landing... 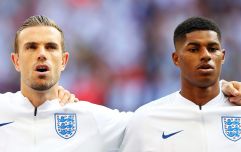 END_OF_DOCUMENT_TOKEN_TO_BE_REPLACED

Absolute magic. Fair play to him. You'd never see John Terry attempting anything like this.

Thankfully, the 29-year-old didn't appear to do too much damage to himself with the fall and was swiftly up on his feet in seconds.

Chelsea went on to take a two goal lead into the break, with Eden Hazard adding to Diego Costa's opener minutes later.

Not the finest of opening 45 minutes for Leicester, who arrived at Stamford Bridge in 12th place in the league with eight points from their opening seven matches, and left the ground with no points, losing the game 3-0.


popular
Bill Shankly’s grandson asks for statue to be removed from Anfield
'War-scene' in Tyrone dressing room before 2005 final sums up an iconic team
Solskjaer chats with protesting United fans who broke into club's training ground
We knew Sean O'Brien wouldn't let us down with his Lions XV
Keith Earls backed for Lions XV by one of the best in the game
Dream on hold for Munster fans as O'Gara agrees to new deal at La Rochelle
Springboks legend Tendai Mtawawira tells us what he really thinks of Ellis Genge
You may also like
2 days ago
Super League: What are they proposing and why are people so angry?
2 days ago
Super League: Ensuring failure isn't an option for the cowardly cabal
2 weeks ago
Only a devoted diehard would ever get full marks in our Liverpool quiz
3 weeks ago
You'll need to be on top form to get 20/20 in this 2000s footballers quiz
1 month ago
"Is that the hardest team ever assembled in the Premier League?"
1 month ago
Man United appoint first Football Director and confirm Darren Fletcher role
Next Page