Darren Fletcher has revealed who had the best first touch during his time at Manchester United.

The current West Brom captain was speaking to football journalist Graham Hunter, and reserved some special praise for Roy Keane.

"Roy Keane was one of the best passers of the ball I've ever seen," Fletcher said.

"In terms of his touch and the pace in which he'd pass the ball forward and always pass it forward and broke the lines of the opposition quickly. He was the best at that. At breaking the opposition’s line and getting attacking players on to a transition."

Keane and Fletcher played together at Old Trafford for over three seasons, before Keane's acrimonious exit in November 2005.

The then United captain had an infamous showdown with Alex Ferguson after Keane criticised a number of teammates, including Fletcher, in an MUTV interview.

However, there's clearly no animosity between the players now. 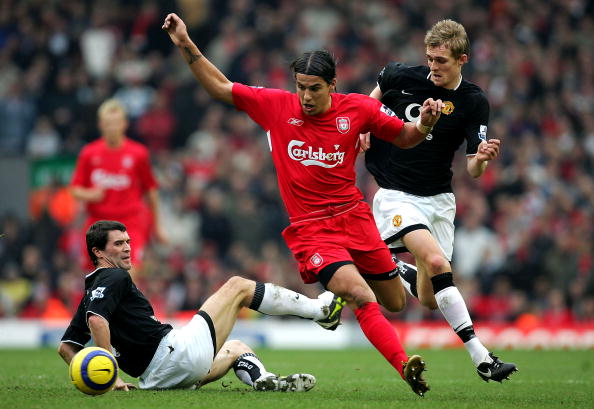 "His touch was immaculate," Fletcher continued, "he had the best first touch. All these things were so underrated in his game."

"Everyone looked at him as this ferocious competitor and box-to-box runner and tackler. That wasn't false, but, with the ball, he had one of the best first touches and the best pass forward into the attacking half to break the lines of the opposition that I've ever seen."

"Then you've got Paul Scholes who maybe got recognised even more for his controlling the game abilities when Roy moved on. Because Roy controlled the midfield, Scholesy was then the one who got forward and got goals and used his technique higher up the pitch."

You can listen to the rest of Fletcher's interview with Hunter here:

popular
How The Mountain lost 36kg ahead of boxing fight with The Beast
Sam Bennett's green jersey masterclass got Lance Armstrong talking
The SportsJOE 12 o'clock quiz | Sam Bennett special (Day 184)
Irish cyclist Sam Bennett delivers classic putdown to British cycling magazine
Peter Sagan pays classy tribute ahead of Sam Bennett's big moment
"He's found a way to do it. Whether that's good or bad for the game, I don't know"
The Ireland XV we would start against Italy
You may also like
2 days ago
Ed Woodward explains Manchester United's lack of transfer activity
5 days ago
QUIZ: Can you name the 5 Man United players in 15 seconds?
5 days ago
Man United beaten to Sergio Reguilon
1 week ago
Sergio Reguilon edges closer to Man United move as talks intensify
1 week ago
'I only have myself to blame for this huge mistake' - Mason Greenwood
2 weeks ago
Sergio Reguilón would be a massive upgrade on Luke Shaw for Man United
Next Page