Drinkwater 'DIDN'T HEAR ABOUT THE NEWS BEFORE HE POSTED THAT'

Make no mistake about it, this is an emotional day for all those connected with Chelsea Football Club. Frank Lampard is gone. Not dead, just sacked as manager, but given his status as a club legend, you can understand why some of the fanbase are particularly upset to seeing him turfed out by Roman Abramovich.

Not everyone, however, is that upset about it. Or at least that's how it seemed for a brief while after a quick check of Danny Drinkwater's Instagram Stories.

END_OF_DOCUMENT_TOKEN_TO_BE_REPLACED

Within minutes of the announcement confirming Lampard's departure, the Chelsea midfielder - exiled on loan in Turkey with... *checks Google*...  Kasimpasa - posted a picture of himself back in his Leicester days, celebrating a goal.

Many interpreted the post as a thinly-veiled dig at Lampard, who clearly didn't see the 30-year-old as part of his first team plans at Stamford Bridge.

Thankfully, this was all one big misunderstanding, wasn't it? Phew! After being called lots of horrible names by disgruntled Chelsea fans on social media, Drinkwater deleted the post and followed up with a *completely believable* explanation soon after, putting the matter to bed once and for all.

'THOUGHT THAT WAS A BIT OF A STRANGE REACTION...' Drinkwater shouted. 'DIDN'T HEAR ABOUT THE NEWS BEFORE I POSTED THAT.

'I WAS JUST MISSING PLAYING. THE MANAGER WAS SOMEONE I LOOKED UP TO HUGELY AS A PLAYER.' 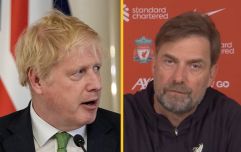 END_OF_DOCUMENT_TOKEN_TO_BE_REPLACED

So, yeah, glad he cleared that one up. We've absolutely no doubt whatsoever that Chelsea fans and everyone else will accept this explanation, apologise for those horrible names and just move on with their lives.

We look forward to seeing Drinkwater back in a Chelsea shirt under Thomas Tuchel.


popular
David Meyler on how Kenny Dalglish almost signed him for Liverpool
QUIZ: You have 60 seconds to answer one Premier League goalkeeper question
Boris Johnson slams Jurgen Klopp for defending Liverpool fans booing national anthem
Sean O'Brien could get to play England, at Twickenham, in his final game
Gearoid Hegarty's harsh red card leads to a heated debate in The Sunday Game studio
"I think there are only five Kilkenny players who are guaranteed to start on any given day" - Cody's motivational methods
Jamie Vardy says 'Wayne Rooney is talking nonsense' about telling his wife to 'calm down'
You may also like
1 day ago
Erik ten Hag criticised after 'tone deaf' Marc Overmars comment
1 day ago
QUIZ: Can you name these 26 Premier League winners?
1 day ago
Pep Guardiola reveals what he said to Mark Noble during touching embrace
1 day ago
Chelsea team-mates 'shocked' as Andreas Christensen reportedly refused to play in FA Cup final
1 day ago
Real Madrid unveil new home shirt featuring iconic retro numbers
2 days ago
Erik ten Hag terminates contract with Ajax early to start work at Man United
Next Page