Brazilian defender Dani Alves scored one goal and produced another two assists in Brazil's 5-0 demolition of Peru on Saturday.

The 36-year-old got on the end of a sweeping move that ripped through the Peruvian defence with a series of one touch passes before Alves rifled the ball past the goalkeeper and into the back of the net.

🔥 "What a flourish, that was Brazil" 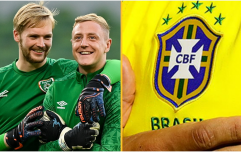 END_OF_DOCUMENT_TOKEN_TO_BE_REPLACED

The victory gives Brazil two wins from three group stages games in the Copa America but for Alves he used the opportunity to announce after the game that he would be leaving PSG.

“Today I close another cycle in my life, a cycle of victory, learning and experiences.

"I would like to thank the PSG family for the opportunity to together build a page in the history of this club.

“I would like to thank all the staff for their affection, respect and complicity from day one … you make this club a little more special.

“It was two years of resilience and continuous reinventing to fulfil my mission, but in life everything has a beginning, a middle and an end and now the time has come to put that final point here.


popular
"If I break my wrist, it's on f***ing both of you." - Koepka and Berger act the spoiled child
Shane Lowry delivers big time for Europe as he takes down US stars
"I told him the absolute truth" - Sergio Garcia on his Ryder Cup talk with Rory McIlroy
Simon Zebo gives Andy Farrell better answer than any interview could provide
Galway fans' frosty reception for Davy Fitz doesn't make any sense
Padraig Harrington's 12th hole reaction as McIlroy and Poulter roasted needs no words
Team USA stars so confident of victory, they start chugging beers at Ryder Cup
You may also like
2 weeks ago
Wild scenes in Brazil as health authorities stop game and try to deport four Argentina stars
1 month ago
Paul Walsh reveals how he met Ronaldinho at his home in Rio de Janeiro
1 month ago
Kerry footballer plays keepie uppies with Brazil legend Ronaldinho
7 months ago
Watch the official trailer for Netflix's hotly anticipated Pelé documentary
2 years ago
Lionel Messi sounds off on 'bull****' officiating following Brazil loss
2 years ago
Marta delivers passionate plea to Brazil's next generation after World Cup exit
Next Page