Croatia sack assistant ahead of World Cup semi-final with England

Croatia have dismissed their assistant coach Ognjen Vukojevic after the former international published a politically provocative video on social media following his side's penalty shootout win over Russia on Saturday.

Vukojevic recorded a video with defender Domagoj Vida after the game in which both men dedicated Croatia’s victory to Ukraine.

Ukraine are engaged in a political conflict with Russia that centres over the Kremlin's annexation of Crimea into the Russian Federation, which sparked conflict in eastern Ukraine. 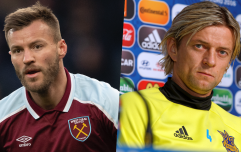 END_OF_DOCUMENT_TOKEN_TO_BE_REPLACED

After a brief review of the incident, FIFA confirmed that it had simply issued a warning to Vida over his comments.

“We can confirm that FIFA’s Disciplinary Committee has sent a warning to the player Domagoj Vida due to his video statement following the 2018 Fifa World Cup match between Russia and Croatia,” Fifa wrote in a statement.

However, Vukojevic, who was capped 55 times by Croatia between 2007 and 2014, was not spared by the Croatian Football Federation who have relieved him of his duties with immediate effect.

A statement from the federation read:

“The Croatian Football Federation hereby notifies the public that Ognjen Vukojević has been relieved of his duties as an associate of the coaching staff of the Croatian national team by decision of the management of the Croatian FA, and that he will no longer be a member of the Croatian delegation at the FIFA World Cup in Russia.

"Vukojević published a controversial video on social media after the match between Croatia and Russia in the quarter-final of the FIFA World Cup. FIFA has opened a disciplinary procedure on the matter.

"The Croatian Football Federation (HNS) has decided to revoke Vukojević’s team accreditation at the FIFA World Cup and to relieve him of his duties as an observer for the Croatian national team.

"HNS hereby apologizes to the Russian public for the actions of a member of the Croatian delegation.

"Ognjen Vukojević and Domagoj Vida likewise apologize for their statements, which were in no way intended to have political connotations, yet which unfortunately left room for such interpretations.”

According to Fifa’s disciplinary code, political slogans are banned from the game while Section 54 states that: “Anyone who provokes the general public during a match will be suspended for two matches and sanctioned with a minimum fine of CHF 5,000 (£3,800)."

Croatia will play England in the semi-final of the World Cup on Wednesday at the Luzhniki Stadium in Moscow.