Not to piss on their parade, but...

France won the World Cup yesterday afternoon, beating Croatia 4-2 in a game that was wide open from start to finish.

It was a game decided on fine margins. The first goal, a result of Antoine Griezmann going down very easily, went in with the help of a deflection from Mario Mandžukić. France's second goal was also fortunate for them, as the referee dithered over the penalty decision for a long time before eventually giving it. 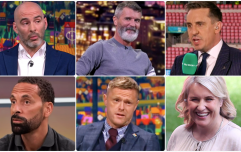 Absolutely no doubt who was the top pundit of Euro 2020

END_OF_DOCUMENT_TOKEN_TO_BE_REPLACED

But it was their third and fourth goals that really caught people's eye. Kylian Mbappé and Paul Pogba put the game to bed with strikes from outside the penalty area, leaving Croatia little chance of levelling the score again, but the goals were arguably made to look better than they were.

Croatian goalkeeper Danijel Subašić failed to dive properly in order to stop either shot, as he looked resigned to conceding almost every shot that came towards him.

Over in ITV's Moscow studio, Roy Keane noted, too, that the Monaco goalkeeper did not look as sharp as he had earlier in the tournament.

The line was delivered with typical candour from Keane and had fellow pundits Ian Wright and Gary Neville laughing in the studio.

Looking back on the match statistics, Subašić is credited with three saves from the six he faced during the match [the own goal being an unfortunate anomaly]. Not exactly a stinker but he will know himself that he could have done better for the second half strikes.

The 33-year-old's failure to save these shots wasn't due to a lack of effort though, as the Monaco man was carrying an injury from the quarter-finals, as many viewers pointed out:

Is Subasic still injured? If so, probably fair to say he, y'know, shouldn't have played and failed to dive for two goals so far

Subasic looked like he never recovered from injury against Russia. Didn't move for Trippier's reachable shot against England and same story for the goals from Pogba and Mbappe today. Serious questions if they played an injured keeper. #WorldCupFinal

Roy Keane on #Cro Subasic poor game (though didn’t look fit): “You’re hoping your goalkeeper will make a save during the game. The goalkeeper didn’t make a save, which didn’t help.” @itvfootball 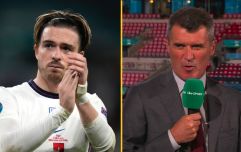 END_OF_DOCUMENT_TOKEN_TO_BE_REPLACED

Towards the end of extra time in Croatia's quarter-final against Russia, Subašić suffered a muscle injury [hamstring] that limited his mobility, but was determined to play through the following matches for his country.

Croatia made it through against England despite his lack of fitness but it France were able to expose his lack of mobility a lot more, shooting from distance knowing he wouldn't be able to dive as well as usual.


popular
Paul O'Donovan busts the cliches and leaves the mystery behind him in one more emphatic interview
Ireland's rowing heroes on what everyone was shouting as they beat Team GB to bronze
Next time someone doesn't cut you slack for commuting to training, show them Joe Canning's words
BREAKING: Grainne Murphy issues heartfelt statement as she retires from international swimming
Warren Gatland with great response after being asked if he'll set up Twitter account
Aidan O'Shea on gym work, training over lockdown and the importance of younger players bulking up
Rory McIlroy's true allegiance summed up in one text message to Justin Rose
You may also like
2 weeks ago
Roy Keane's lays into two English stars for standing back from the shoot-out
2 weeks ago
No-one should be surprised with Roy Keane's take on England's heart-breaking loss
2 weeks ago
Roy Keane's reaction to that Luke Shaw goal was every Irish mammy
2 weeks ago
Roy Keane had an appropriate response when asked if he was jealous of England
3 weeks ago
England fans couldn't get over Roy Keane's take on that massive penalty call
3 weeks ago
Roy Keane has ITV crew in stitches with Neil Diamond concert story
Next Page