Pre-season is going to be awkward.

Burnley teammates Connor Roberts and Wout Weghorst exchanged words after Wales' clash with the Netherlands, with the Welshman asking the match-winner why he didn't do that for their shared club side.

Teun Koopmeiners opened the scoring for Louis van Gaal's men in the 50th minute, but Wales - buoyed by last week's win over Ukraine that ensured they would be at their first World Cup since 1958 - hit back in added time through Rhys Norrington-Davies.

However, Burnley frontman Weghorst scored a late winner in the 94th minute to ensure Holland maintained their perfect record while condemning Wales to their second straight Nations League loss.

END_OF_DOCUMENT_TOKEN_TO_BE_REPLACED

The tense atmosphere inside the Cardiff City Stadium appeared to boil over after the final whistle when Wales defender Roberts confronted Weghorst - appearing to ask him, "Why didn't you do that for Burnley?"

Weghorst - who arrived at Turf Moor in January - managed to score just two goals in 20 appearances as the Clarets were relegated to the Championship.

The match-winner quickly brushed his Burnley teammate aside, but Roberts continued to shout things at the 29-year-old.

Connor Roberts after Weghorst’s last minute winner: “Why couldn’t you do that for Burnley?”

However, Weghorst did eventually turn around and appeared to say, "this isn’t about Burnley, shut up."

Weghorst 'will not play in the Championship'

END_OF_DOCUMENT_TOKEN_TO_BE_REPLACED

The former Wolfsburg man has previously insisted that he does not expect to be playing Championship football next season.

"We have clearly agreed in advance that I will not play in the Championship," Weghorst told Voetbal International.

"The club would like to keep me and will do everything they can to return to the Premier League as soon as possible." 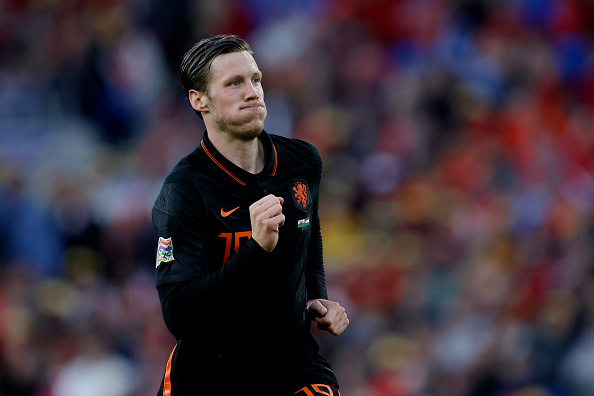 He added: "For next season it is important that I can perform at a high level, also with a view to the World Cup in Qatar. You shouldn’t believe everything the media says.

"There is interest from Germany, England and Turkey First I will focus on Oranje here and perform as well as possible. Then we’ll talk to Burnley about what’s next."

Weghorst, who arrived at Burnley for £12m, has made 13 appearances for the Netherlands, scoring three goals and adding one assist.