Austria play the Republic of Ireland on Saturday evening, with the away side heading into the game in a strong position.

Ireland are in second place, level on seven points after three games with leaders Serbia in Group D.

A win could take Martin O'Neill's team top of the group, should Serbia fail to beat Wales in Cardiff later in the day, and a draw would keep the side in contention to finish in the top two places in the group.

Austria, meanwhile, need a win to kick-start their campaign to qualify for the World Cup, after losing their last game to Serbia, 3-2.

There'll be a lot of scouts in attendance to watch the game.

15 clubs in total, including Manchester United, Sevilla and Marseille, have sent scouts to the Ernst-Happel-Stadium in Vienna.

Football journalist Miguel Delaney tweeted a photo of the list of scouts in attendance ahead of the game, and it makes for interesting reading. 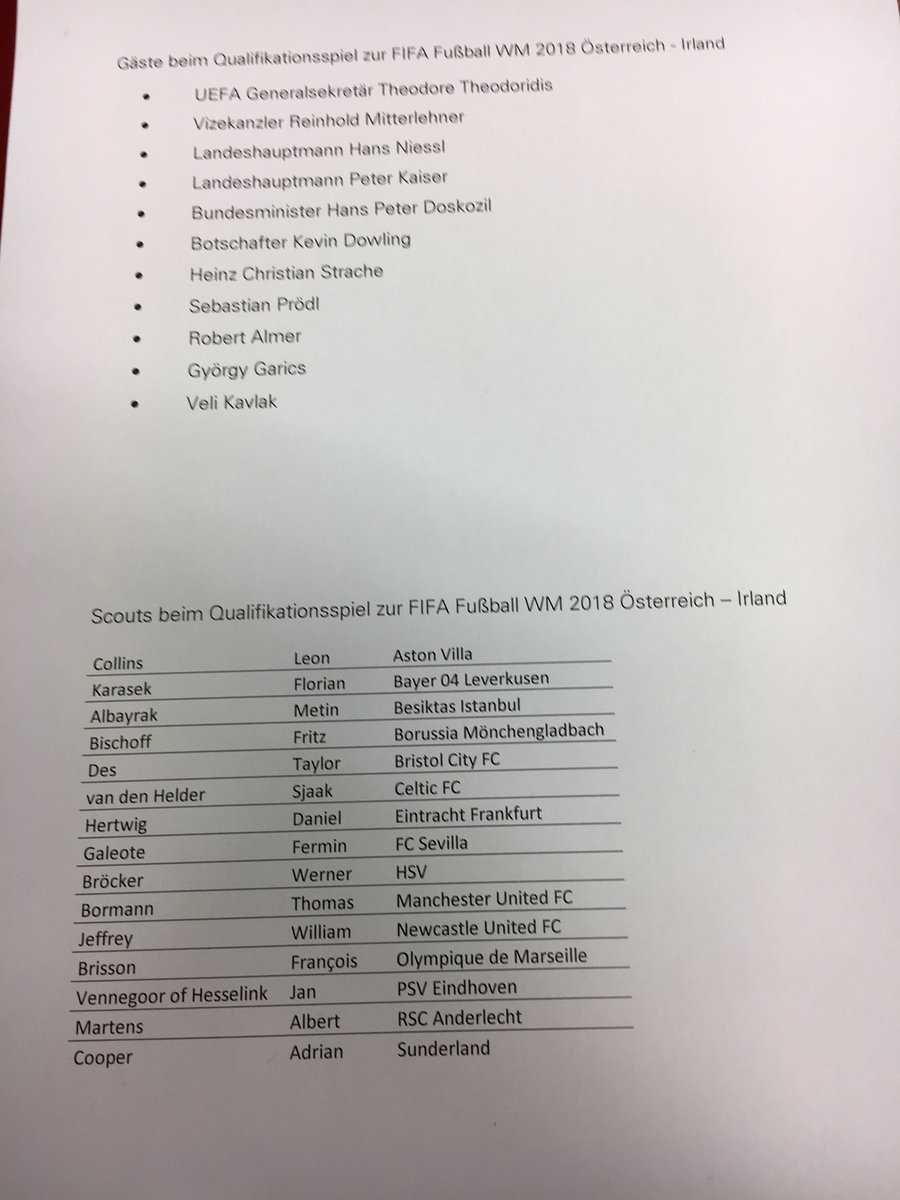 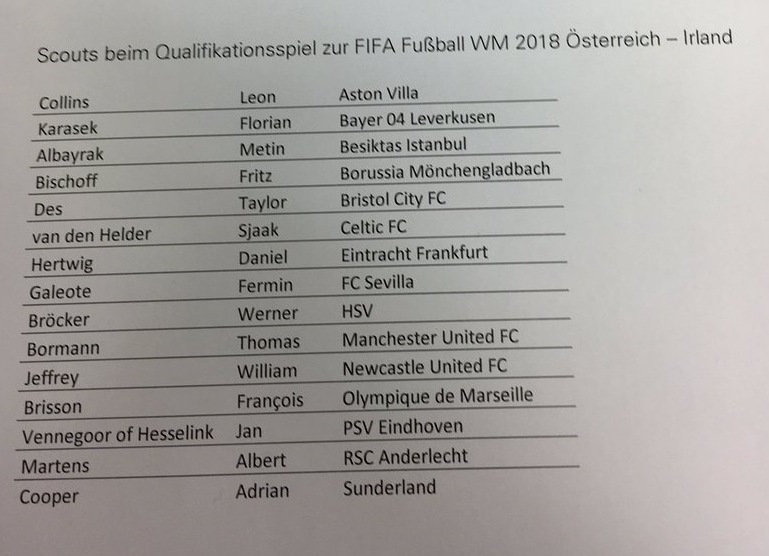 Whether they're all in attendance to look at Irish players is highly unlikely, but the presence of scouts from Newcastle United and Sunderland is in keeping with recent stories regarding Irish players.

Daryl Horgan, the Dundalk winger, has been linked with a move to the Magpies following his brilliant displays for the Premier Division champions over the past year.

END_OF_DOCUMENT_TOKEN_TO_BE_REPLACED

Sunderland have also been linked with a January move for Robbie Brady, after the Ireland star failed get a move away from Norwich City following their relegation from the Premier League last season.

Unfortunately, the Manchester United scout appears to be casting his eye over an Austrian, rather than one of O'Neill's players.


popular
Solskjaer gamble on Harry Maguire backfires in most horrendous way
WATCH: Munster fans in Paris pay tribute to Anthony Foley with spine-tingling Fields of Athenry rendition
José Mourinho swaps Conor McGregor a Roma jersey for some whiskey
GAA at its best as Bellaghy players run into team-mate who buried his father that morning
Alex Ferguson wrote Mickey Harte a letter - ex Tyrone boss reveals in new memoir
"I'll go back running the roads now and make sure my body doesn't get lazy"
Jeff Stelling loses it during Soccer Saturday after Brighton was denied a blatant penalty
You may also like
5 days ago
Claiming Callum Robinson has 'silenced his critics' with goals misses the point
6 days ago
Chiedozie Ogbene gives a brilliant interview after leaving Nemo Rangers behind to chase soccer dream
6 days ago
Callum Robinson performance shows Ireland what could have been
1 week ago
Adam Idah ready to play, but Ireland hit with late blow ahead of Azerbaijan clash
1 week ago
The Ireland XI that should get a much-needed victory in Azerbaijan
3 days ago
Fighting breaks out as Hungary fans clash with police at Wembley Stadium
Next Page