They made a stance.

Cliftonville players refused to acknowledge God Save The Queen ahead of their Irish Cup final defeat to Coleraine on Saturday afternoon.

The Reds went head-to-head with the Bannsiders at Windsor Park in Belfast, with the north Belfast side keeping their heads bowed as the British national anthem rang out over the stadium prior to kick-off. Coleraine ran out 3-1 winners thanks to goals from Darren McCauley, Aaron Burns and Eoin Bradley.

Earlier this week, the Irish Football Association refused Cliftonville's request to not play God Save The Queen before the match.

"Following a written request from Cliftonville Football Club the Board of the Irish Football Association met tonight (May 3), and considered the playing of the National Anthem at the Irish Cup final," an IFA statement read.

"The members expressed sympathy for Cliftonville's position, but decided that the current board policy, agreed in August 2013, should stand. Therefore, the National Anthem will be played before the match.

"The board also committed to conducting a future stakeholder review of the issue." 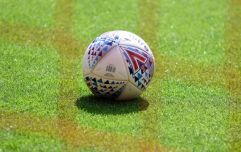 END_OF_DOCUMENT_TOKEN_TO_BE_REPLACED

Cliftonville issued a short statement in response, which read: "Cliftonville Football Club note tonight's Irish Football Association statement following the decision of the majority of the IFA Board in regards to the playing of an anthem at this year's Irish Cup Final.

"We will be making no further comment until after the Final."

The IFA dropped God Save The Queen in 2013 when Cliftonville met Glentoran in the final in order to create a “politically neutral environment”.

Cliftonville last lifted the Irish Cup in 1979 while Coleraine's win was their first since 2003.

What the IFA said in 2013 re: The Irish Cup decider between Cliftonville and Glentoran. In the interests of fostering a "politically neutral environment" God Save the Queen would not be played.

Question: What happened to fostering a "politically neutral environment" in 2018?

popular
The SportsJOE 12 o'clock quiz | Day 76
SportsJOE 2000s Football Quiz | Round 4
The SportsJOE 12 o'clock quiz | Day 75
Promoter teases Pacquiao-GGG superfight, but fans are having none of it
Here's a list of 23 people who own a greater share of the UFC than Conor McGregor
Israel Adesanya's rise should serve as a lesson to every young fighter
WATCH: The only man to score a victory over Jon Jones brutally knocked out by Sokoudjou
You may also like
1 year ago
Former Man United goalkeeper Roy Carroll divides opinion for clear snub of Cliftonville players
1 year ago
Cliftonville release scathing statement regarding player suspended for betting breaches
2 years ago
Eoin Bradley ignores manager's instruction before scoring superb solo goal
4 years ago
PIC: Irish football side pay wonderful tribute to terminally ill fan who watched game from sickbed
4 years ago
Irish football club deliver exhibition in trolling their own player with hilarious tweet
3 weeks ago
You'll need all your powers to get 20/20 in this 1990s Irish footballers quiz
Next Page