Another day, another rejection for Man United

In what is becoming a familiar pattern this summer, one of Manchester United's summer transfer targets has reportedly turned them down. This time, it's Christian Eriksen.

United boss Erik ten Hag worked with Eriksen briefly as he trained at Ajax after making his first steps back into football following his cardiac arrest at the 2020 European Championships. 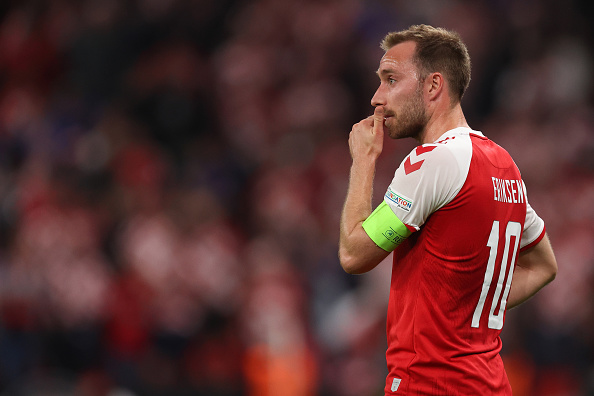 END_OF_DOCUMENT_TOKEN_TO_BE_REPLACED

The Denmark international is technically a free agent after his six-month deal at Brentford ended at the end of the 21/22 season. And while the 30-year-old has received an offer to extend his contract with the Premier League side, he is considering his options elsewhere.

Eriksen's return to football saw him look back to his very best, putting several clubs on red alert. The midfielder is also keen to play Champions League football once again - something Man United cannot offer next season. But that hasn't stopped them from trying.

According to The Guardian, the midfielder has turned down Man United's advances in favour of a return to Tottenham Hotspur.

Tottenham focused on other signings

Eriksen's wishes may not be granted though. As reported by The Daily Mail, Tottenham have 'stepped back' from the race to sign the Denmark midfielder.

END_OF_DOCUMENT_TOKEN_TO_BE_REPLACED

Antonio Conte's side have made three signings already this summer (Fraser Forster, Yves Bissouma and Ivan Perisic) but want to prioritise other positions ahead of bringing back Eriksen.

It is believed that the 30-year-old wants to remain in London, opening the possibility of him signing a new contract at Brentford and remaining under Thomas Frank's guidance.


popular
Man United could be blocked from playing in the Champions League next season
Ireland team vs. France: Form players rewarded and a welcome return
Clive Woodward happy to 'eat humble pie' after bold comments about Ireland
Man United's four player transfer shortlist if Qatar takeover goes ahead
Man City expect Pep Guardiola to leave
"I should have been more mature" - O'Sullivan's injury trail a cautionary tale for Sigerson casualties
The Ireland team Andy Farrell needs to start when France come to town
You may also like
1 day ago
Casemiro explains why his name has been spelt wrong his whole career
1 day ago
Man United vs Leeds: Why the game won't be shown on Irish TV
3 days ago
Erik ten Hag draws up three-player transfer wishlist for summer window
3 days ago
Man United ponder appeal as new footage of Casemiro red card incident emerges
3 days ago
Man United squad don't want Mason Greenwood back in changing room
5 days ago
Alex Ferguson on how Owen Hargreaves was 'one of the most disappointing' signings he made for Man United
Next Page