The defender was called into a few travelling Manchester United senior squads at the end of last season.

Celtic have signed up another promising Irish youngster, in Lee O'Connor.

The 19-year-old was given permission to leave the Ireland U21 squad today to head to Glasgow and sign for Celtic. He joins the Scottish champions from Manchester United on a four-year deal. 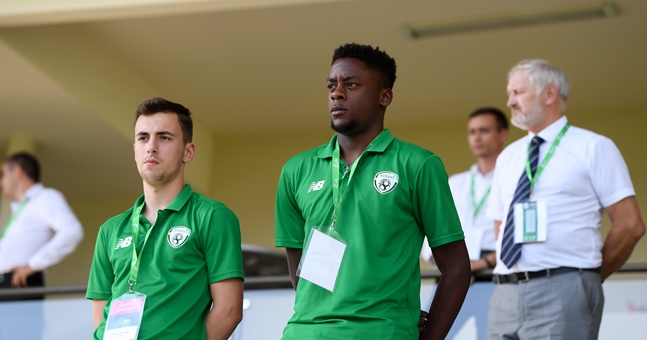 O'Connor will join fellow Ireland U21 teammate Jonathan Afolabi, who joined from Southampton last month, in the Celtic senior squad. In an interview on the Celtic website, O'Connor says:

"It feels surreal at the moment... I found out last weekend about Celtic’s interest, and it went from there. Today was a bit hectic but I’m just glad to get it through before the window shuts.

"The Irish squad met up this morning and I spoke to the manager, Stephen Kenny, and he was fine about me coming here today. I’ll meet up them again tomorrow for training.

"I’m a versatile player. I can play anywhere across the back four or midfield if needed. I’d say that I’m a wholehearted defender. I love defending and tackling, but I like to get forward as well. First and foremost, though, I am a defender."

END_OF_DOCUMENT_TOKEN_TO_BE_REPLACED

O'Connor is a Celtic fan and recalled having come to 'Paradise' for a stadium tour with his family when he was a youngster. He even spoke enthusiastically about his new side's 2-0 win over Rangers at the weekend.

"It was a great result, so it’s a good start to the season for the team, and it was good to see a fellow Irishman [Jonny Hayes] getting a goal too,” he said.

"Walking through the Celtic Park tunnel, even in an empty stadium, I just want to run out on to the pitch, but I’ll just have wait and see what happens. It’s been a surreal week, but I’m really happy to be here and really proud as well."

popular
"There were some tough battles but I was happy to test myself against the best"
QUIZ: Name the clubs to have lost in every Champions League final
"The divil you know is better than the divil you don't" - Larkin stands by Cody
QUIZ: How many of these obscure Manchester United and Liverpool players do you remember?
The SportsJOE 12 o'clock quiz | Day 285
Chris Barrett's tackle stats against Dublin are unprecedented
Teammates XI Quiz: Liverpool – 2005 Champions League Final
You may also like
2 days ago
QUIZ: Name the Man United XI from the last time they led after 17 games
2 days ago
Gary Neville apologises for his commentary during Burnley vs Man United
3 days ago
Harry Maguire furious as Robbie Brady avoids punishment for Cavani challenge
3 days ago
Arsene Wenger claims he 'did not see' Pizzagate, blames Man United
6 days ago
Four senior Man United players should be heading off before January ends
1 week ago
10-week ban for Kieran Trippier reportedly scuppered Man United move
Next Page