The 18-year-old has excelled for Brighton and Hove Albion's Under-23 team, scoring 17 goals already this season and winning the Premier League 2 player of the month award in November.

According to The Scottish Sun, Connolly is in talks with Brighton over a new contract but could leave the club on loan next month. Brendan Rodgers is interested in taking him to Celtic Park. 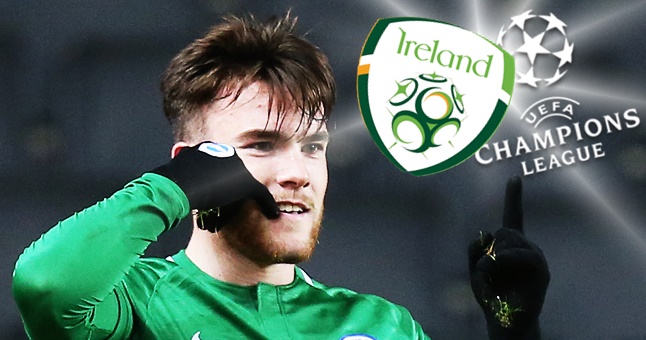 They're taking notice of Aaron Connolly. Eventually, there came a time when they couldn't not. Th...

Sky Sports reported last month that Hoffenheim are tracking Connolly. The German side have scouting young players on the fringes of Premier League sides, and the Irish striker has caught their eye.

The Scottish Sun claims that Manchester United and Manchester City are also interested in the teenage striker.

However, despite his goalscoring feats, the interest of big clubs throughout Europe and his undoubted potential, Chris Hughton appears unlikely to blood him in the first-team this season.

🏆 @AaronConnolly_9 has been nominated for the @CheckatradeTrpy Player of the Round for Round 1⃣...

END_OF_DOCUMENT_TOKEN_TO_BE_REPLACED

The Brighton manager can choose from Glenn Murray, Jurgen Locadia or Florin Andone to start up front, so Connolly's chances of starting for the Premier League side this season seem limited.

A loan move and senior football until the end of the season may suit all parties.

Connolly joined the Seagulls from Mervue United in 2016. He has played for Ireland at under-17 and under-19 level.


popular
QUIZ: You'll need to be a massive Ireland fan to get all these one-cap wonders
"I did for one second think of flinging the boot at him" - Maher's journey an inspirational thing
Man City make €80million offer to bring Romelu Lukaku back to the Premier League
The SportsJOE 12 o'clock quiz | Day 288
"Newcastle fans have been served up dire tripe for about ten years"
Conor McGregor mentions title outsider when quizzed on next opponent

You may also like
1 day ago
Redemption for Victor Lindelof gives United supporters another reason to believe
3 days ago
Mesut Özil all but confirms Arsenal exit with not so cryptic tweet
3 days ago
Alex Ferguson's dismissive comments confirm truth about Jordan Henderson
6 days ago
Paul Pogba's reward for Burnley bullet by may be seat on Anfield bench
6 days ago
QUIZ: Name the Man United XI from the last time they led after 17 games
6 days ago
Harry Maguire furious as Robbie Brady avoids punishment for Cavani challenge
Next Page