He got what he came for.

When Carlos Tevez left his boyhood club Boca Juniors for Shanghai Shenua in December 2016, the transfer raised a few eyebrows.

Tevez flirted with the idea of retiring from football back in December 2016, but chose to join the Chinese club and it doesn't take a genius to work out why. 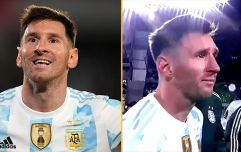 Lionel Messi breaks down in tears after Argentina win

END_OF_DOCUMENT_TOKEN_TO_BE_REPLACED

The Argentine was reportedly earning £32 million per year at Shanghai Shenua, making him one of the best paid players in the world. Breaking down the numbers, Tevez's lucrative contract earned him £615,000 per week, which equates to £88,000 per day.

Fellow Argentina international Ezequiel Lavezzi has also been playing in the Chinese Super League since 2016, earning even more than Tevez. Playing for Hebei China Fortune, Lavezzi reportedly earned a mind-blowing £798,000 per week.

Now that Carlos Tevez has pocketed his £32m, his time in Shanghai has come to a premature end. The club have agreed to terminate his contract 12 months before it was due to be up.

Shenhua and Tevez end the contract. Thanks for Carlitos’ contribution and good luck! https://t.co/YRmI6v1vIR

Shanghai Shenua fans don't appear to be grateful for any such 'contribution', as seen in the comments to the club's Instagram post. 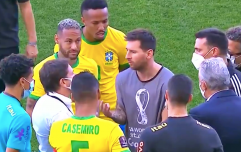 END_OF_DOCUMENT_TOKEN_TO_BE_REPLACED

During his time in China, Tevez scored just four goals in 20 appearances. That's £8m per goal and £1.6m per appearance. And he didn't exactly run his socks off.

Here he is making precisely no effort to move while his team are out of possession.

Boca Juniors have confirmed the return of their hero for what will be Tevez's third spell at the Buenos Aires club. They will be hoping he brings a bit more energy to the side than what he showed in China.

Carlos Tevez has returned to Boca Juniors for a third stint with his boyhood team. #BocaJuniors


popular
Shane Walsh: 'That's not how I was coached to play football. No one was coached to play football that way'
Allan Saint-Maximin pays tremendous, heartfelt tribute to Steve Bruce after sacking
Spicy Donegal semi-final the highlight of a rip-roaring weekend of GAA on the tv
Seven exciting Ireland prospects pushing for November squad inclusion
"It’s taken its toll" - Steve Bruce gives first interview after 'mutually consenting' to leave Newcastle
"Ah, come on!" - Richie Sadlier and Didi Hamann couldn't even agree to disagree on Griezmann's red
Derry club win county final factfile games with extravagant set of jobs
You may also like
10 months ago
"The greatest goal we've ever seen would've been chalked off"
10 months ago
Diego Maradona: A remarkable career in pictures
1 year ago
The hardest Lionel Messi quiz you will ever take
1 year ago
The Ultimate Diego Maradona Quiz
2 years ago
WATCH: Argentina finish tournament with 47-17 win over USA in RWC 2019
2 years ago
WATCH: England head to the quarters with a 39-10 victory against Argentina in RWC 2019
Next Page