Bruno blazes high over the bar

The Red Devils conceded late as Kortney Hause's 88th minute header put the away side in the lead.

END_OF_DOCUMENT_TOKEN_TO_BE_REPLACED

However, United were awarded a late penalty in added time after goalscorer Hause handled the ball inside the penalty area.

Although both Cristiano Ronaldo and Fernandes were on the pitch when the penalty was awarded, the responsibility fell to the latter.

Despite having scored 13 penalties for United in the Premier League, the Portuguese international skied his penalty well over the bar - the first time in his career that he has failed to hit the target from the spot.

For the first time in his senior career, Bruno Fernandes completed missed the target from the penalty spot. 🤯 pic.twitter.com/Z259IbdkzI

END_OF_DOCUMENT_TOKEN_TO_BE_REPLACED

Whilst Ole Gunnar Solskjaer's side had the chance to steal a point, their overall performance still left a lot be to be desired.

Despite racking up 28 total shots, the hosts only managed four on target - with 11 off target and 13 blocked.

Additionally, in their last two fixtures, United have tallied 55 shots, but of those, only 10 have been on target, as per StatmanDave.

END_OF_DOCUMENT_TOKEN_TO_BE_REPLACED

The Red Devils' defeat in their third in the space of ten days, including back-to-back defeats at Old Trafford.

The home side enjoyed much of the ball in the first period and managed to create a number of chances, the best of which saw Fernandes fire over the crossbar after a nice move that involved Luke Shaw and Paul Pogba.

As they continued to create chances going forward, they remained vulnerable at the other end of the pitch.

Dean Smith's men should've gone into the half-time break with a 1-0 advantage, but Matt Targett somehow managed to sky his effort over the bar after a spectacular cross from Matty Cash, despite the goal being wide open.

United started the second period how they finished the first, but were hit with a sucker-punch in the 88th minute when Villa defender Hause directed his header past De Gea to give the away side a shock lead.

Yet, Solskjaer's men were awarded a penalty in added time after Villa's goalscorer was adjudged to have handled the ball. Emi Martinez was not letting the hold-up in play, as Villa protested the call.

The Argentinean approached Fernandes and started pointing to Ronaldo, telling him to give the spot-kick to his compatriot. Mike Dean should have told the Villa No.1 to back off, but it was left to Edinson Cavani to intervene: 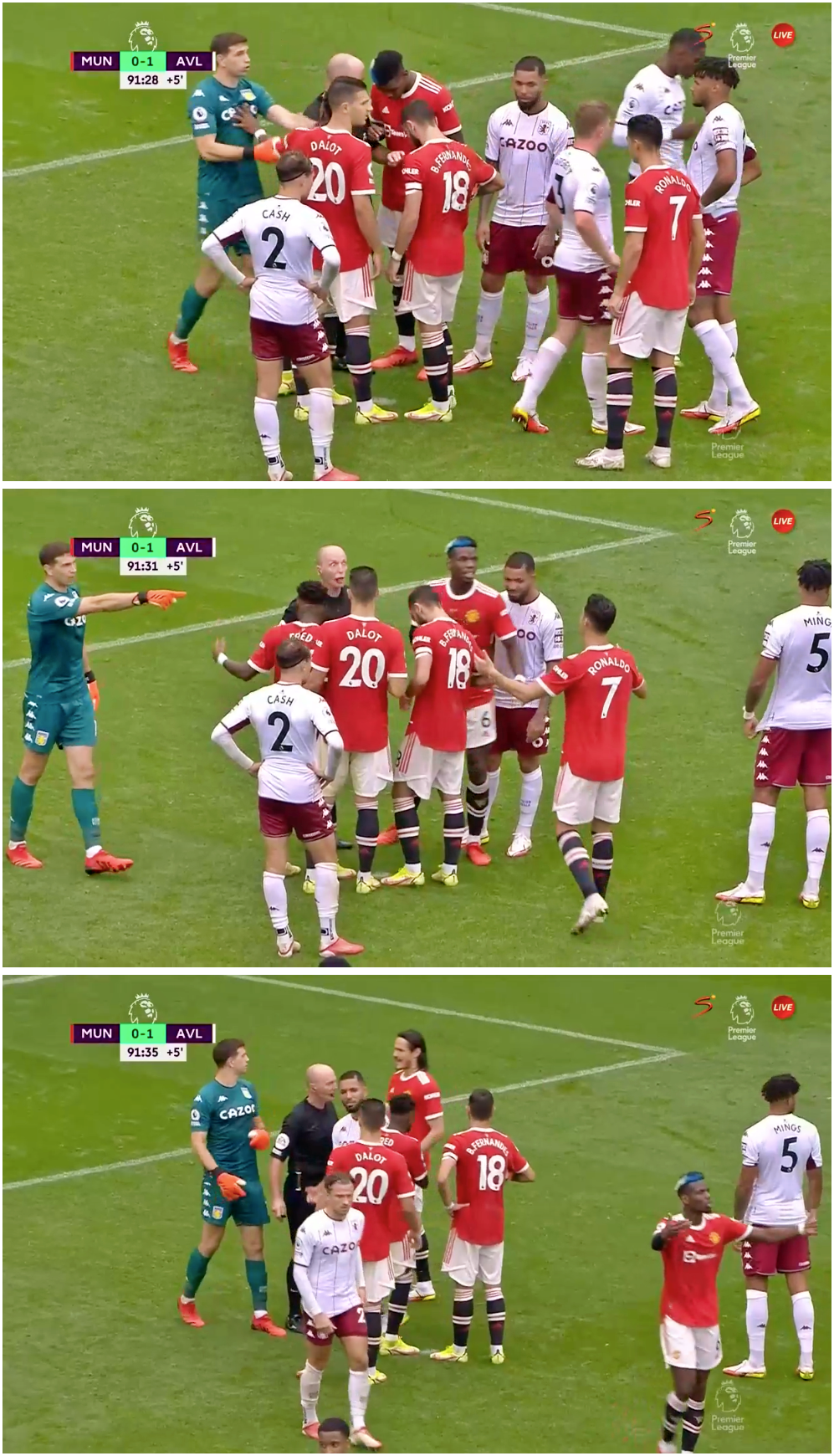 Whatever seed Martinez planted, he then backed himself to make the penalty save.

The responsibility rested on the shoulders of the usually reliable Fernandes, however, he couldn't convert from the spot as he saw his penalty fly over the crossbar.

Man Utd's first defeat of the Premier League season sees them drop to fourth in the table, level on points with Manchester City, Chelsea and Liverpool - who have a game in hand over United.