Making your senior international debut as a teenager is an extraordinary achievement, and it should be remembered as one of the greatest moments of your life.

For Dublin 19-year-old Gavin Bazunu, the pride of that momentous occasion will always be overshadowed by the sour taste of a 1-0 loss to international minnows Luxembourg. The hope now is that the youngster will go onto achieve enough both for Ireland and in club football so that he can reflect on this memory as a bump rather than the norm and by his performance and his post-match interview, it's clear that he has both the attributes and the mentality to kick on.

The on-loan Rochdale goalkeeper's display was the bright spot in an otherwise bleak evening for Ireland. First he recovered well to keep out an attempted lob from Gerson Rodrigues before showing his sharpness and flexibility to deny Vincent Thill from close range in the second half. 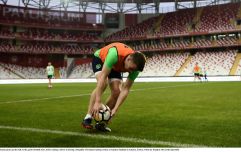 END_OF_DOCUMENT_TOKEN_TO_BE_REPLACED

Bazunu couldn't be faulted for Rodrigues' late winner - a powerful strike into the corner - and looked both assured and confident throughout the game. Afterwards, Seamus Coleman mentioned that he hoped the defeat and its recriminations wouldn't demoralise youngsters like Bazunu but given the debutante's mature interview with Ann-Marie Keegan on Virgin Media Sport, you wouldn't think the Donegal man has anything to worry about.

"It's a good personal achievement for myself but it's disappointing for the team," the Man City owned player began.

That was certainly a harsh personal evaluation from Bazunu, who showed his strong on-field communication as well as shot-stopping skills. He went onto thank Coleman for being so welcoming this week before adding that he will give his mother the jersey from his Ireland debut.

"All the lads were great with me, especially Seamus who has been brilliant with me all week. That made me really comfortable. That's my job (to communicate), I have to be the loudest, I have to communicate.

Huge credit to Gavin for doing this interview, he was the first one out to speak with me.

I wasn’t sure what to expect, last time I interviewed him he was 16 @ShamrockRovers but he spoke so honestly, even if he was a little harsh on himself. Better nights ahead for him 🇮🇪 https://t.co/O8C2CKyCyH

There are better days ahead for this impressive young man.


popular
Next time someone doesn't cut you slack for commuting to training, show them Joe Canning's words
Seán O'Brien lauds "unbelievable" Maro Itoje as Irish fan makes confession
Ireland's rowing heroes on what everyone was shouting as they beat Team GB to bronze
Commentator sparks outrage after 'misgendering first openly non-binary Olympian'
County star reveals just how much free gear the players get every season
Sam Warburton wants Lions to make three changes for Second Test
Mona McSharry's incredible Olympics journey ends by blitzing Irish record
You may also like
1 month ago
Damien Duff bides his time before roasting the FAI with 'motivational video' comment
1 month ago
"A proud moment for myself, my family and my friends" - Chiedozie Ogbene makes history for Ireland
1 month ago
New-look Ireland XI Stephen Kenny should pick to excite fans and get first win
3 months ago
Jamie Carragher on how close he came to Ireland call-up
3 months ago
30 seconds of Stephen Kenny firing bullets
4 months ago
Brian Kerr had seen this coming from miles away, we just weren't ready to hear it
Next Page