'Unfortunately for us, we weren't granted any dispensation which is obviously disappointing.'

Brendan Rodgers has spoken about his "disappointment" at the Premier League's refusal to postpone Leicester's match against Tottenham on Thursday as the club deal with a Covid-19 outbreak.

The Foxes boss revealed that his side would be without nine players due to positive coronavirus cases and injuries when they host Spurs, who have missed their last two matches due to a Covid outbreak themselves.

Tottenham boss Antonio Conte also admitted that Spurs had asked the Premier League to postpone the game so that they could play their Europa Conference League match with Rennes that was postponed last week. 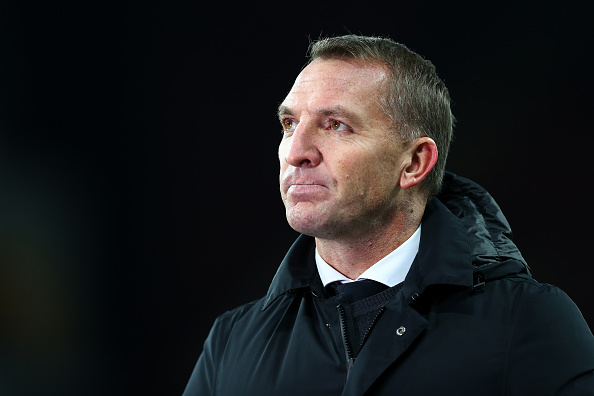 While the Premier League dismissed Leicester and Spurs' requests, Manchester United's trip to Brentford and Burnley's home tie against Watford have both been cancelled this week.

END_OF_DOCUMENT_TOKEN_TO_BE_REPLACED

Asked whether the club had requested a postponement, Rodgers said: "Yeah. We've looked at that. Unfortunately for us, we weren't granted any dispensation which is obviously disappointing.

"We're a team and a club that have always wanted to support all the measures and everything else, but maybe when you need a little bit of support with the extreme situation that we're in, we weren't able to get that which was disappointing."

The Foxes secured a 4-0 victory against Newcastle on Sunday, but Rodgers has since revealed that there was major doubts as to whether Leicester would even be able to field a team for the game.

🗣"It would be nice if there was more clarity around that but to not be given that support is a little disappointing."

Brendan Rodgers feels frustrated that Leicester's application to have their game postponed was refused by the Premier League pic.twitter.com/x8H2NGQD3W

END_OF_DOCUMENT_TOKEN_TO_BE_REPLACED

He added: "We were a big doubt for the game against Newcastle with all the issues and problems we had but because of the greater good of the game, and the supporters, we obviously played the game.

"Since then we've picked up a couple more injuries as well that are maybe not directly from Covid but they're certainly Covid related because players are picking up injuries because we can't rotate the squad and the team.

"So it's a really a challenging time for us but whatever plays we'll always put it out to do our very best."

The Premier League board decide on a case-by-case basis whether to postpone a fixture, taking medical advice into consideration when making their final verdict.

🎙 "When we needed support with the extreme situation we were in, we weren't able to get that."

With nine players out due to injury, Covid & illness - Brendan Rodgers was disappointed the PL refused #LCFC's request to postpone their game v #THFC.pic.twitter.com/Rs2kfUsFAc