This bizarre own goal gifted Everton an equaliser against Hull City

Bottom of the lot in the Premier League, Mike Phelan could do with getting a few wins together if they're to avoid what seems like an inevitable trip back to the Championship.

So, leading Everton by a single goal as their New Year's Eve eve match approached half-time, what they didn't need to do was concede an equaliser. Especially not one that could quite easily have been avoided.

With just a minute of stoppage time at the end of the first half, Leighton Baines played a corner into the Hull box. 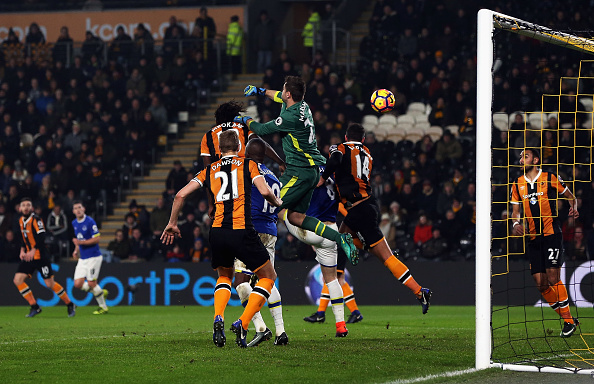 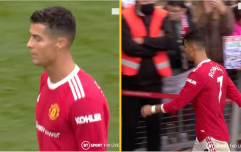 END_OF_DOCUMENT_TOKEN_TO_BE_REPLACED

Goalkeeper David Marshall should have come out and dealt with it. Indeed, when he managed to get above Romelu Lukaku and a couple of his defenders, he looked well positioned to do precisely that.

Instead of catching it, he opted to try and fist the ball clear of danger. Emphasis on the word 'try'.

Mistiming the punch, the ball glanced off his arm and deflected into the Hull goal. A soft equaliser. The sort of thing you don't want to see when your team's embroiled in a bottom of the table scrap.


popular
Man United aren't good enough to accommodate Ronaldo's refusal to work
Luiz Felipe in tears after bizarre red card after full-time whistle
"I won't let that happen!" - Peter O'Mahony riled up by Connacht star
Player manager takes over Naas just days before county senior semi-final
Outrageous scenes as Glentoran 'keeper attacks his own team-mate in moment of madness
Ireland star Will Connors on his rude awakening playing GAA in KIldare
'I was sitting here this week and people were wondering if I was going to retire'
You may also like
3 weeks ago
David Moyes reveals how Marcelo Bielsa derailed Man Utd title win
2 months ago
Everton make statement as player suspended pending police investigation
3 months ago
"People don't realise how hard a decision it actually is" - Seamus Coleman on choosing soccer over GAA
3 months ago
Seamus Coleman reveals what current Everton player would make a good Gaelic footballer
4 months ago
Rafa Benitez 'on the brink' of being named Everton manager
7 months ago
Tom Davies and Leighton Baines seen buying homeless people drinks day after derby win
Next Page