So many to choose from, and not just from a sporting perspective.

A good exercise, every now and then, for sport is to stop looking forward and cast your mind back.

It was a challenge, writes Pat McCarry, set to up-and-coming sportswriters, too - What is your best sporting moment of the past decade?

END_OF_DOCUMENT_TOKEN_TO_BE_REPLACED

Going all the way back to May 2012 up to the current day, these writers were asked to reflect on 10 full years of sporting highs and lows, and put together some words on what made that moment stand out.

For me, that question brings pure subjectivity to the fore. What sporting moment stands out for me? Five came bubbling to the surface before plenty of other worthy candidates. In no particular order. 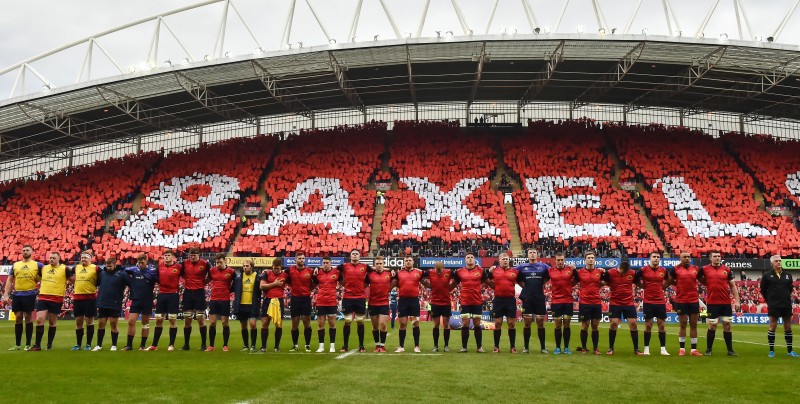 The Munster team during a minute's silence in memory of their late head coach Anthony Foley. (Photo by Brendan Moran/Sportsfile)

Some of the best sporting moments of the past decade

END_OF_DOCUMENT_TOKEN_TO_BE_REPLACED

Even as I typed out that personal Top 5 list, above, some of Conor McGregor's victories came back to me, beating New Zealand in Dublin in 2018 and 2021, and the famous All-Ireland finals and replays between Dublin and Mayo.

In asking yourself that question, and reflecting, you may be surprised what jumps out first.

Here is a selection of stand-out memories from some aspiring sportswriters when years and years of magical moments already lying in store. 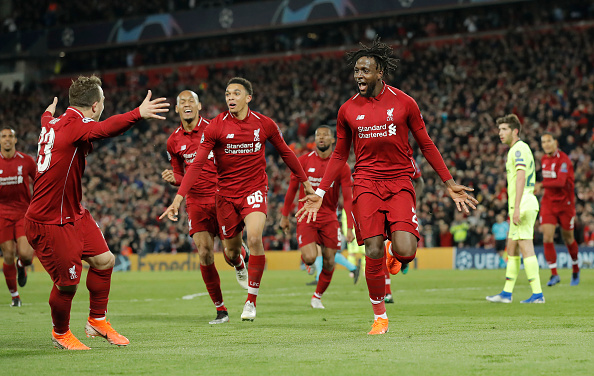 The UEFA Champions League has brought many nights of magic and excitement. I must say, though, that May 7th in 2019 was an occasion to remember, and cherish, for Liverpool fans and one that Barcelona supporters would want to forget in a hurry.

A depleted Liverpool side took on the Catalan giants without their main man Mohamed Salah, who had been in amazing form all season. Salah missed out due to a knock, as well as fellow frontman Roberto Firmino, meaning they had to place their hopes on support acts Divock Origi and Xherdan Shaqiri.

Liverpool came into the match, at Anfield, trailing 3-0 after the semi-final first leg at the Camp Nou. The outstanding moment from that game had been a wonderful Lionel Messi free-kick that left Alisson Becker rooted to the spot. To emerge victorious, Liverpool would need to score four goals without a response from Messi, the in-form Luis Suarez or another former Red, Philippe Coutinho.

The match kicked off at 8pm but, before that, one never would have imaged that hope seemed lost for Liverpool. The atmosphere at Anfield was electrifying as the home fans filled the ground and shook it to the rafters with 'You'll Never Walk Alone' chanted in unison and banners waved proudly throughout.

Liverpool took an early lead, in the seventh minute, with Origi giving them a much-needed boost that the mountain could be scaled. Early in the second half, substitute Georginio Wijnaldum scored two quick goals in two minutes and Anfield was hopping. The travelling Barca supporters and couldn’t believe how jarred their team looked, and how Lionel Messi had been kept quiet by the superb Liverpool backline.

Liverpool capitalised on that uncertainty, with just over 10 minutes to go, when Trent Alexander Arnold caught the Barcelona team off-guard with a precise pass from a corner kick. Origi was there, once again, to grab his second and secure the comeback.

From 3-0 down to 4-3 winners, on aggregate. It was a match filled with excitement and played with intensity for the whole of the 90 minutes. What seemed impossible turned out to be very much a stunning reality. 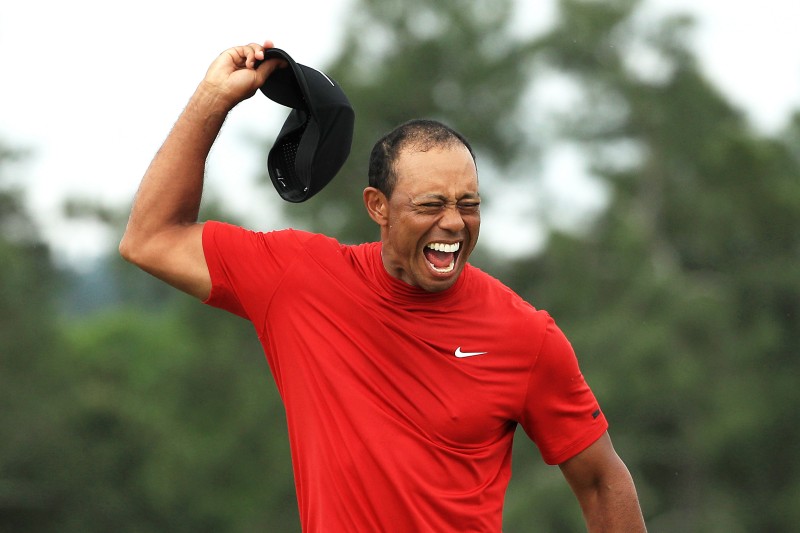 It was an incredible achievement for Woods, as nobody expected him to bounce back from his serious injuries and the personal issues, back at the end of 2009, that nearly ruined him. Woods missed two years of majors, (2016 and 2017). People wondered at that stage would he ever return to playing competitive golf, never mind contending or winning a major.

The 2019 US Masters had everyone talking about golf, the day after. It just showed how important for the sport that it was for Tiger to be back, and competing at the top of the leaderboard in the majors again. It was Woods' first major win since the US Open in June 2008.

The previous year had seen Woods contend in majors - he could have won The Open Championship and US PGA if he did not fade in the final few holes. He finished in the top 10 at both tournaments, an impressive achievement considering he had missed the previous two golfing seasons.

Tiger Woods changed golf when he burst onto the scene in 1997 and he made it cool for younger people to follow it. It was seen by some as a stuffy game where players were straitened and lacking star power. Woods changed this and, as a result, lots of people got inspired and started taking up the game.

Molloys had become a frequent setting for pints while on shift in a nearby pub. Injuries to key players handicapped the home leg. Tonight there was a chance to have a real go off it.

Lucas Moura was an unsung hero of the season, with a brace by the time I had started watching. Tottenham had nothing to lose. As a club too used to being the bridesmaid, Spurs had the chance to interrupt the vows, or forever hold their peace.

Adversity is inevitable in this competition. Holding a near-invincible Man City to a 1-0 victory was no mean feat. Scoring three in Manchester proved Tottenham belonged at this level, even if one came off the hip of Fernando Llorente. 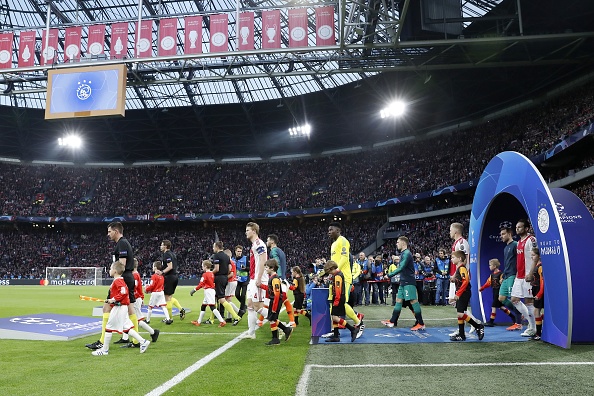 Snarling for a goal to make history. My shaking body swung back and forth on a creaky bar stool. With 12 seconds to go. The ball was clutched in the hands of Ajax goalkeeper Andre Onana. Naively, he punts the ball into Tottenham possession.

Son had dropped deep. A true leader need not rely on anything but instinct in times like this. 7 seconds left on the clock. Moussa Sissoko fires an up-and-under type long ball deep into the Ajax half.

Tottenham has seriously struggled to play through the rampant Ajax press. Pochettino exercised his tactical flexibility, abandoning his possession style for a route 1 approach in the second half.  Veteran Fabio Llorente had become Tottenham's plan B for many games in the second half of the season.

Four seconds remain. From a dizzying height, Llorente beautifully flicks the ball off his knee to the feet of Dele Alli.

Nothing fancy Dele. Keep the ball.

A beautiful flick from the outside of his boot plays in the steamrolling Lucas Moura.

Surely not. Just get it on target.

"They're slipping, They're sliding... IT'S IN, LUCAS MOURA WITH THE HAT-TRICK GOAL"

A bravely taken first-time shot from the Brazilian nestles in the bottom right corner. The clock read one second over added-time as the ball caressed the back of the net. Pure poetry.

My voice bellowed in the quiet pub. Not a single spectator could rationalise the volume of this teenager. Pain, suffering and downright embarrassment. Constantly being tagged with the "bottle job" label. Nothing existed anymore.

It was an out-of-body experience. No moment in my life will ever be able to recreate the utter chaos that took over my vocal cords.

In Spurs fashion, it was harder than it had to be. Tottenham had heavily deviated from the script, in doing so creating the most euphoric of moments. The players were an embodiment of the club motto on the 30th of April 2019.

Without ropes and safety gear, Alex Honnold free-soloed one of the greatest rocks in the world - El Capitan, in Yosemite, California - on June 3rd, 2017.

Honnold was the very first person to scale the iconic rock formation known as El Capitan or “El Cap” in the climbing community.

Sonnold is highly familiar with “free-soloing” as he’s been doing this climbing type for years. It is a form of technical ice or rock climbing where the climbers are alone without ropes, harnesses, or other protective equipment. This makes them rely on their own strength, skill, and preparation.

El Capitan is a vertical rock formation in Yosemite National Park around 3,000 ft from its base to its summit.

Sonnold started entertaining the idea of free-soloing El Cap back in 2009, although it is easier said than done. This tedious process requires extreme focus because any misstep could result in death.

Getting into physical and mental shape is very important for this climb. Sonnold would train for 40 hours a week, from waking up at 4 am to getting a full day of climbing and a nightly stretching routine.

Before attacking El Cap, he had to get comfortable free-soloing the “smaller” stuff. He would climb everything in sight all over the globe, and everything was good practice. In his free time, he would even meditate and place himself on the different pitches up El Capitan, focusing on which hand or foot placement was best.

After years of climbing with a rope and practicing without, on June 3rd, he set off up El Capitan.

This seemly impossible task became possible and left hundreds of thousands of people star-struck, thus creating one of the most impressive and greatest sports moments in the last decade.

Let us know, on social media, what your favourite sporting moment of the past decade is.