Atletico's alternative kit is set to combine the striped design of their home shirt with the colour scheme of their away strip and it's a must-have for five-a-side.

The La Liga club will release the third kit for the 2018/19 season at some stage in September.

Reliable football kit website FootyHeadlines.com have provided us with the first glimpses of the jersey and shorts which will be sported by the likes of Antoine Griezmann and Diego Costa on rare occasions this term.

The third kit is set to feature a unique colour combination of dark teal, ice blue and orange while the stripes will display maps of Madrid's gorgeous city.

All logos will be orange, including the back neck tape which features the image of a trident as a tribute to the city's Neptune Fountain, the monument at which Atletico celebrate major victories. 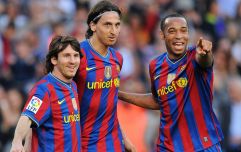 END_OF_DOCUMENT_TOKEN_TO_BE_REPLACED

The shorts will be ice blue with dark teal logos.

Atletico have won one and drawn one of their La Liga games so far in this campaign but got the season off to the perfect start by getting the better of arch-rivals Real Madrid in the Uefa Super Cup final.

popular
Portumna prodigy streaks to eight shot Irish Boys win with bogey free round
"No doubt he'll say he played shit like he normally does, but I thought it was a good game."
The SportsJOE 12 o'clock quiz | Day 144
The SportsJOE 12 o'clock quiz | Day 143
SportsJOE 2000s Football Quiz | Round 12
Three teams Leinster can pit against each other to prepare for Munster
Only a Champions League fanatic would get full marks in this quiz
You may also like
2 months ago
O FENÔMENO: Ronaldo's brief but brilliant stint at Barcelona
9 months ago
Real Madrid are La Liga leaders but remain deeply flawed
10 months ago
Six post-match thoughts on the Madrid Derby
11 months ago
ITV have announced they will broadcast La Liga games every week this season
1 year ago
Leaked: New Barcelona away kit a throwback to retro kits of the 1970's
1 year ago
Gerard Pique reveals his brilliantly childish way of trolling Madrid's journalists
Next Page