How Atalanta have crashed the Serie A party, made a mint and racked up the goals

'La Dea' are making folks sit up and take notice.

In the past three seasons, Atalanta have finished third in Serie A and have scored 265 goals. They have reached a Champions League quarter-final and two Coppa Italia finals.

They have regenerated and revived their team, each season, and have played a blinder in the transfer market. Five players - most notably Amad Diallo (Manchester United) - have been sold on for €150 million despite having only played a combined total of 54 games for the club. 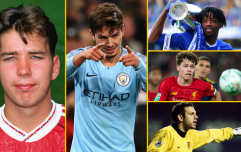 END_OF_DOCUMENT_TOKEN_TO_BE_REPLACED

The talent turnstile at the Italian club is spinning, and every young gun that is sold on gets replaced by another top prospect. The only thing missing, in Bergamo, is silverware. Daniel Nolan takes an in-depth look at how a club that has never won Serie A is consistently mixing it with the big boys. 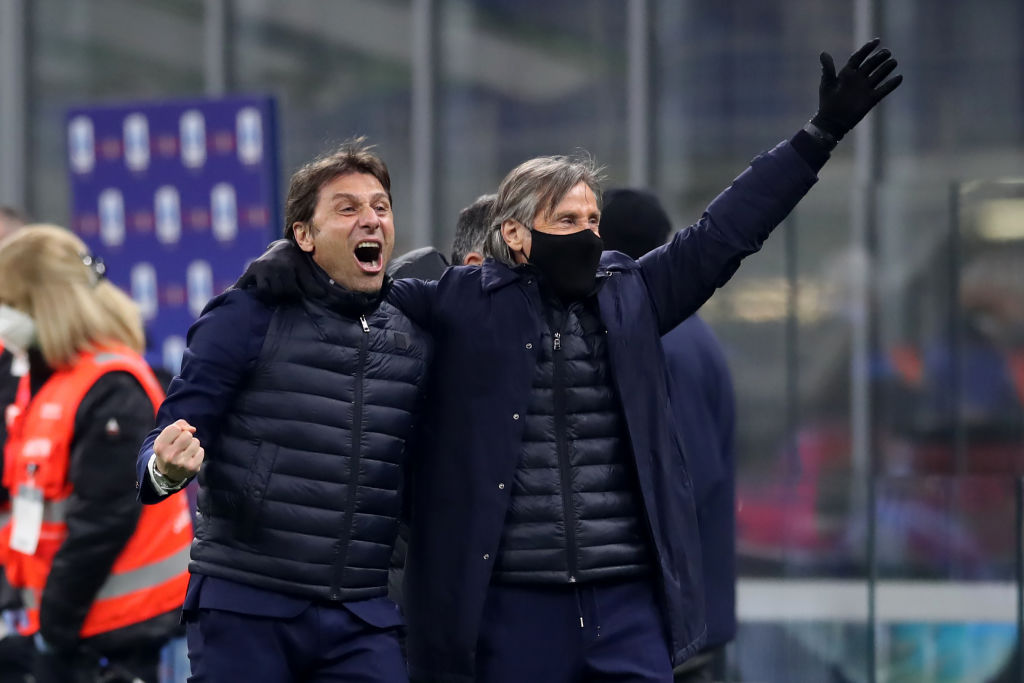 As 11 Atalanta players trudged dejectedly from the Giuseppe Meazza pitch, following an unfortunate and unlikely 1-0 defeat to the champions elect Inter, back in March, the magnitude of coach Gian Piero Gasperini’s accomplishment since taking charge in June 2016 was apparent.

No statistic illustrates Atalanta’s meteoric rise since Gasperini’s appointment more than their record against the elite of Italian football. 14 wins, 14 draws and just seven defeats over the course of the past three seasons, against Juventus, Inter, AC Milan, Lazio, Roma and Napoli. Those numbers increase to 16-14-9 when including the Coppa Italia.

END_OF_DOCUMENT_TOKEN_TO_BE_REPLACED

The aptitude of 'La Dea' for playing the big teams has led to opposition altering their own style in an attempt to slow the almost unstoppable force that is the Atalanta attack.

The relief of the Inter players was palpable after their win in a cagey game. A scrappy goal from Milan Skriniar ultimately proving the difference. However the manner in which Atalanta dismantled Napoli (twice), Lazio and, in particular, AC Milan meant Inter coach Antonio Conte, who has since departed the league champions, could not be blamed for taking the safety first approach. 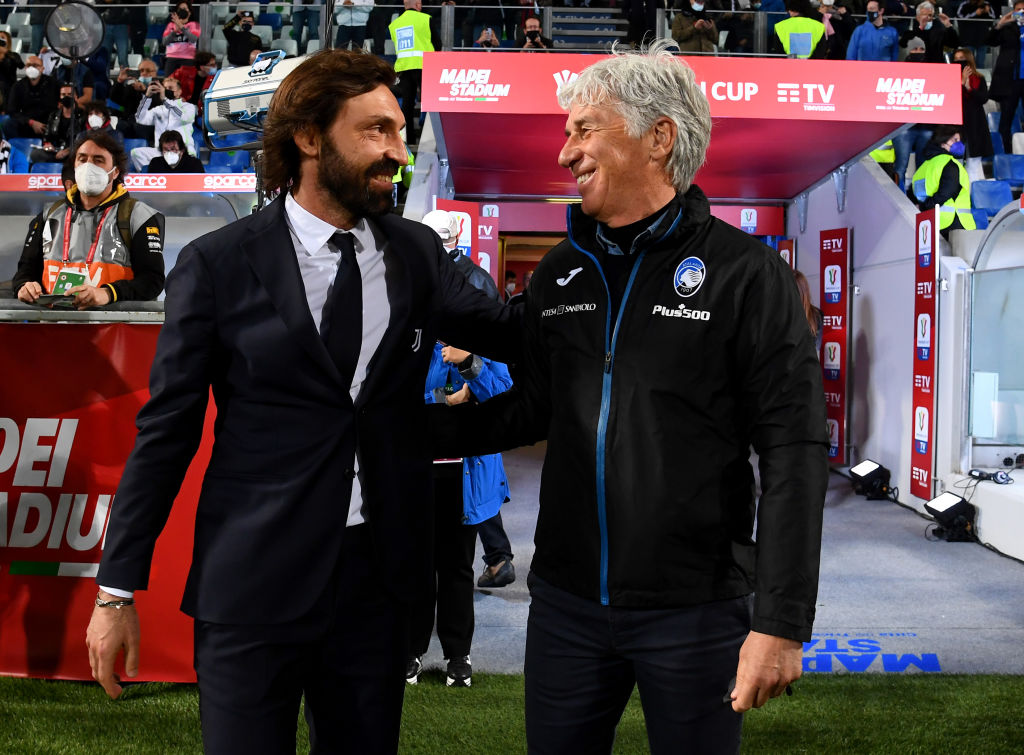 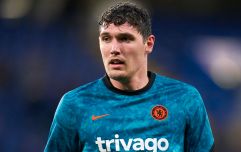 END_OF_DOCUMENT_TOKEN_TO_BE_REPLACED

In the late 1990s and early 2000s, the term ‘Seven Sisters’ first appeared as a means of describing the top teams in Serie A competing for the ‘Scudetto’ (the Serie A title). They comprised Juventus, Inter, AC Milan, Lazio, Roma, Fiorentina and Parma.

Parma fell off due to myriad of financial difficulties that eventually landed them in Serie D. Although they managed to work their way back to Serie A, they have just been relegated back to Serie B.

Fiorentina’s performances have also tailed off in recent years. Napoli and, more recently, Atalanta have taken their places as part of this elite group. Based on recent performances, there is little reason to suggest La Dea are not there to stay for the long haul.

The Evolution of the wing-back

Antonio Conte’s Chelsea caused a stir en-route to winning the Premier League in 2016/17 because of the Italian’s 3-4-2-1 formation, incorporating wing backs Marcos Alonso and Victor Moses, but the system is very common amongst the elite in his homeland.

Juventus, in recent years (Alves & Evra/ Cuadrado & Sandro), Roma (Kardsdorp & Spinazzola), Lazio (Marusic & Lazzari) and Inter (Hakimi & Perisic) have all employed it to varying degrees of success. It has been, however, a hallmark of Gasperini’s managerial career and a pivotal part of Atalanta’s rise to prominence.

The system relies on energy and stamina coming from the wing backs, allowing the forwards to move inside to instigate the high press. These aggressive, swarming tactics result in more balls being won in the opponent’s final third, thus creating more goalscoring opportunities.

As such, the wing backs are arguably the most important players in Gasperini’s system. This makes it all the more impressive that the players used in those positions across his tenure have performed at such a high level despite costing very little.

The Rise of Robin 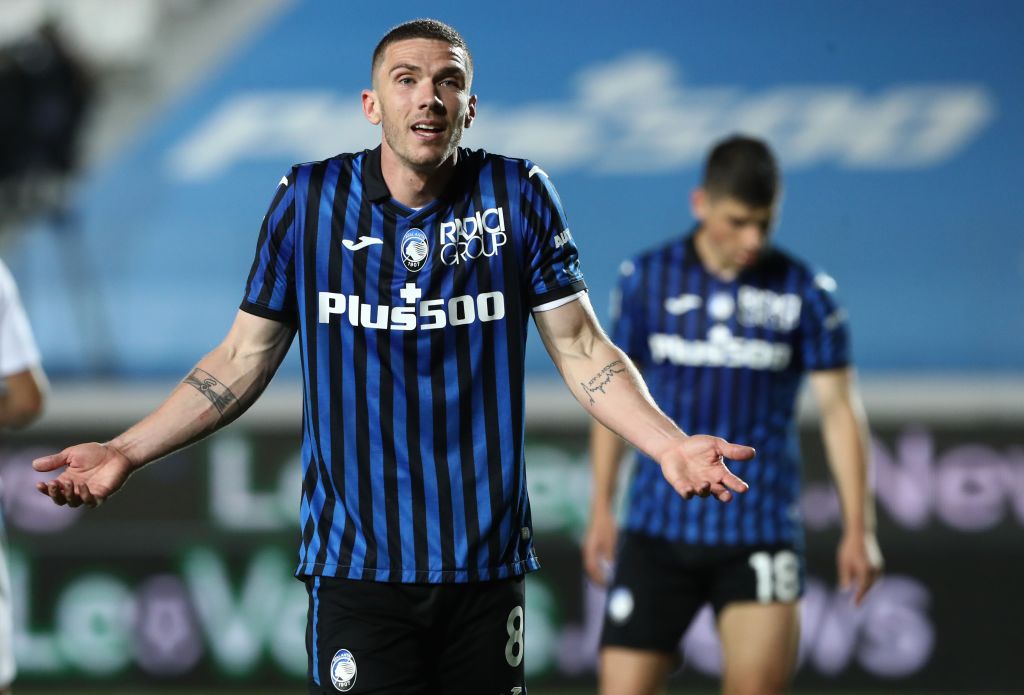 The hidden gem of the side has to be Robin Gosens. According to WhoScored's rating system, the German ranked as Atalanta’s fourth  highest rated player in both 2018/19 and 2019/20, and second highest in 2020/21.

This season he ranks as the 13th  highest rated player in the whole division, which is outstanding for a defender. That puts him in the elite company of Cristiano Ronaldo,  Romelu Lukaku  and Lorenzo Insigne.

Just €900K was enough to bring the German from Heracles in 2017. He made his long-awaited Germany debut earlier this season at the age of 26, which was no less than he deserved after three hugely impressive seasons on Atalanta’s left flank.

His play, as well as Hans Hateboer’s on the opposite side, involves overloading the flanks and doubling up on opposition defenders, playing quick one-twos to get the wing backs into crossing positions. The wing back on the opposite side will often drift into the box unmarked. This presents another target, alongside the forwards, and a headache for opposition defences.

Such has been Gosens, and Hateboer’s impressive performances in recent seasons, it came as something of a surprise when Leicester signed Belgian Timothy Castagne over the aforementioned duo.

Castagne is undoubtedly a good player. He is more versatile than Gosens or Hateboer, with his ability to play on both flanks, and has excelled in his
first season in England. However, Gosens and Hateboer were the indisputable starters in crunch times ahead of the Belgian. This indicates a good piece of business (a recurring theme in recent years) to sell him over the others.

Alejandro ‘Papu’ Gomez, so often the heartbeat of the side before his alleged falling out with Gasperini in December 2020 and subsequent sale to Sevilla, was central to the team’s play.

He harnessed the wing backs’ energy to create chances for the forwards through his link up play. Since his departure in January, the onus of filling his role has fallen on Matteo Pessina and Ruslan Malinovsky [pictured below]. 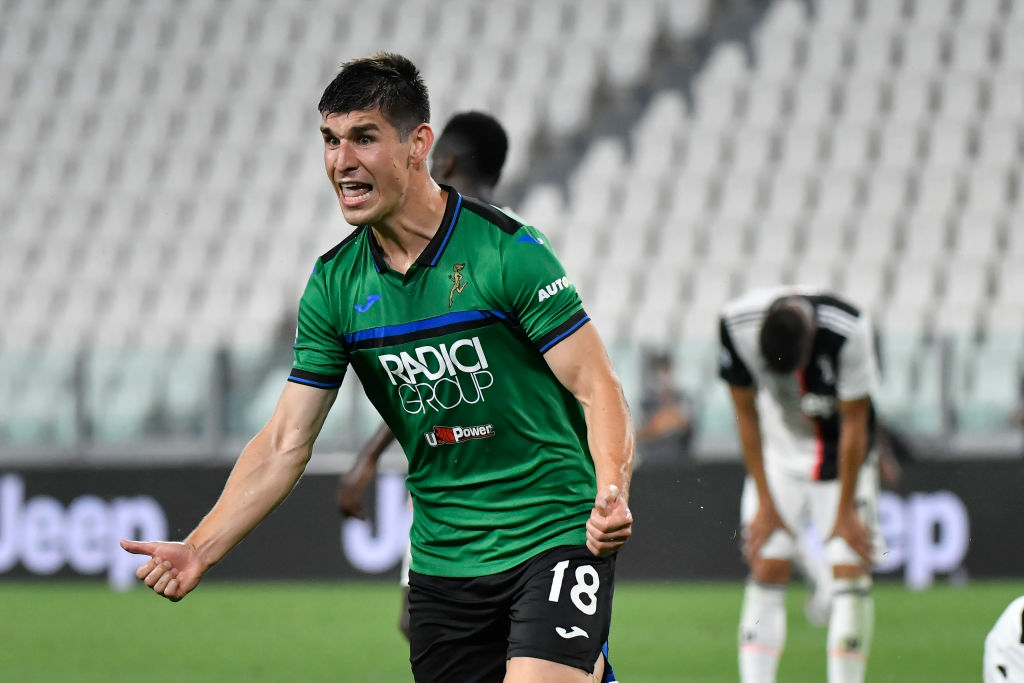 The departure of a club legend perfectly illustrates Gasperini’s next man up policy, with no one player bigger than the team. The Ukrainian in particular has risen to the challenge.

Blessed with a sledgehammer of a left foot, Malinovsky has cemented himself in Papu’s place. 11 consecutive games contributing either a goal or assist has attracted attention from England, with Leicester and Everton reportedly interested.

A squad sharing the load

Such an intense, energetic game-plan demands squad depth, which is another area where Atalanta have excelled in recent seasons.

Often times, squad rotation can frustrate players, however, Gasperini seems to have perfected it. This is exemplified most notably with his forward players  Duvan Zapata , Luis Muriel and Josip Ilicic.

To illustrate the point of Gasperini’s effective squad rotation, no fewer than seven players scored at least seven goals in 2019/20. During that season Atalanta scored an astonishing 98 goals in Serie A, breaking Napoli’s record of 94 set in 2016/17. They finished on 90 league goals this season.

Atalanta cannot compete with the other members of the fabled ‘Seven Sisters’ financially, so do not attempt to.

Gasperini has a net spend of €73m since his appointment. Romelu Lukaku of Inter cost more than Atalanta’s entire starting eleven. Luis Muriel has been the most expensive signing since 2016, at just €18m.

To combat this, a key cog in the Atalanta machine has been investment in their academy and scouting network. The club spends a minimum of €5m annually on youth coaching and the academy, and has done for a number of decades.

This has helped churn out a number of talented players. Andrea Conti, Alessandro Bastoni, Roberto Gagliardini and Dejan Kulusevski  all transferred for significant fees. 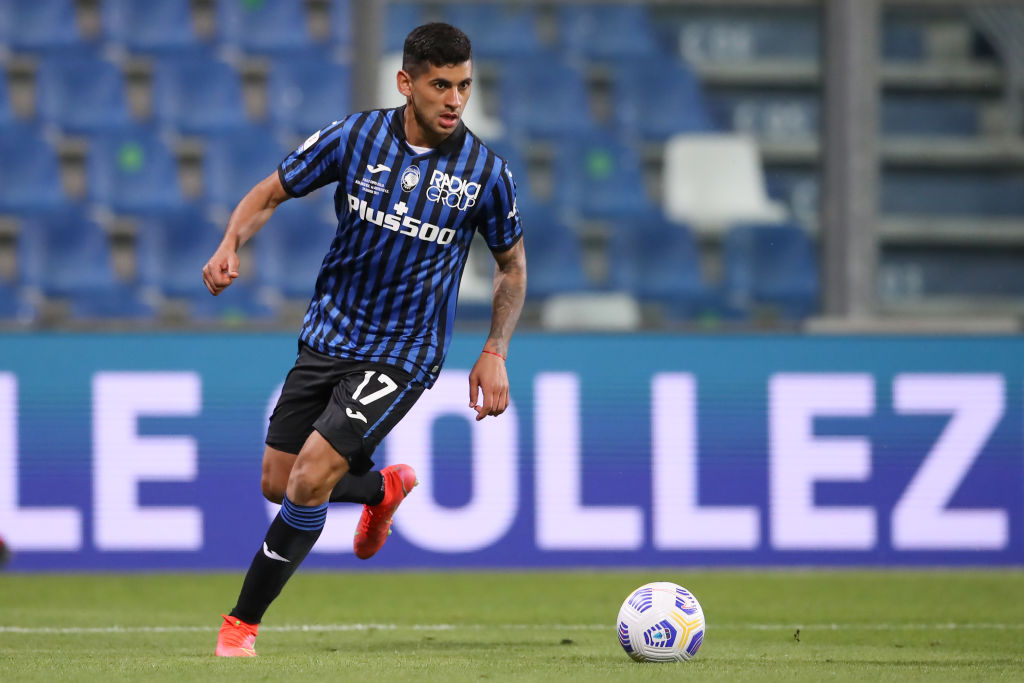 Meanwhile, the scouting network focused on youth, and has identified a number of quality players. The likes of Gosens, Hateboer, Freuler and more recently Cristian Romero [pictured above] have been signed in recent years.

Atalanta signed Romero from Juventus initially on initial loan with an option to buy. This option will undoubtedly be exercised, so impressive has the central defender been. He adds aggression and pace to a backline that can be exposed by the team pressing so high. All have gone on to play key roles in the team’s success.

Most recently, Amad Diallo (four appearances) sold for €40m to Manchester United, despite barely featuring in the first team.

The capacity to keep the core of the team together and avoid being stripped for parts has proven key.

The result of that exodus was narrowly avoiding relegation to Ligue 2, a dramatic fall from grace. Atalanta have avoided this same fate.

This consistency, despite their obvious success, has enabled Gasperini to build more each season. It allowed him to establish Atalanta as a force in Italy and in Europe.

Evidence of this is the demolition over two legs of Valencia in the Champions League, last season. They then pushed eventual finalists PSG all the way in the quarter finals. An underwhelming defeat to Real Madrid, this season, disappointed many, but the Italians are better for it. 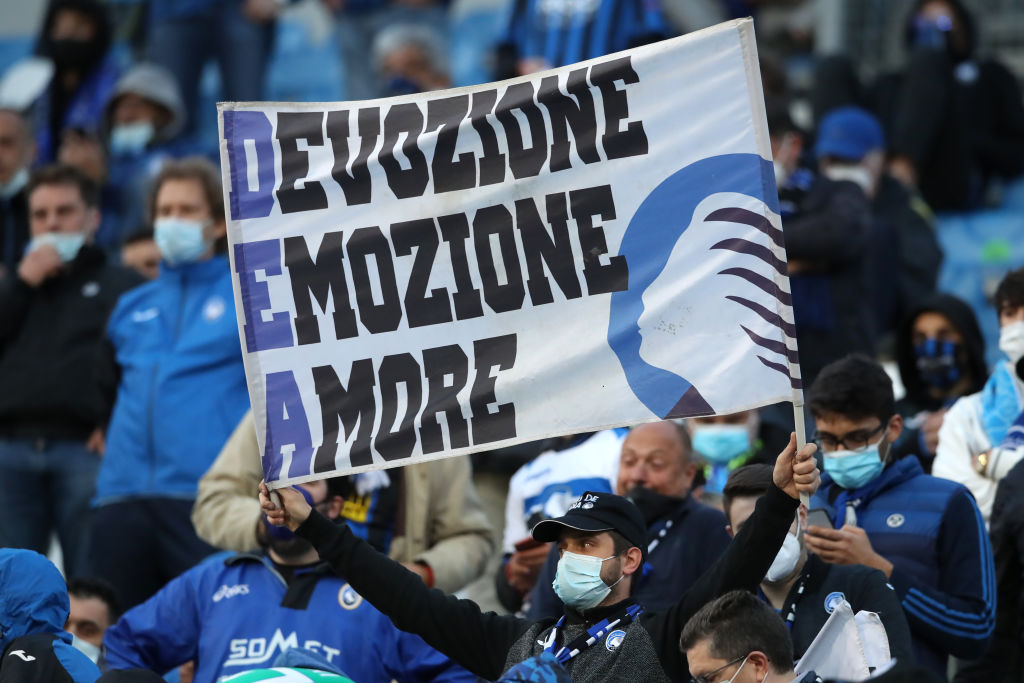 Despite the defeat, the growth of the team caused many heads to be turned across the continent. A 4-3 win over Genoa secured Champions League football next season, and allowed Atalanta to turn their attention to the Coppa Italia final with a Juventus side in crisis mode.

La Dea came into the clash unbeaten since March, a run which includes a win over Juventus. Considered slight favourites to win against the Turin powerhouse illustrates how far little Atalanta have come.

Gasperini described the prospect of winning Atalanta’s first Coppa Italia since 1963 as ‘a wonderful cherry on the cake’ but emphasised that ‘the cake is what we’ve done over the last five years’.

A battling display resulted in a 2-1 defeat, with Federico Chiesa’s brilliant goal proving the winner in an enthralling contest. Kulusevski’s
opener came against the run of play, and although Malinovsky emphatically equalised before the break, Atalanta could not make a dominant first half display count.

To the untrained eye, this clash could have been seen as David vs Goliath, but Atalanta have proven themselves to be an equal to the Turin giants.

For Gasperini, despite a second cup final defeat in three years, bringing an Atalanta side that had been relegated 3 times since 2003 into Europe and establishing them as one of Serie A’s best has been an outstanding accomplishment, and is one he will undoubtedly build on after another fascinating season.