Arsenal fan notices strange occurrence during the Southampton match that may just have 'robbed them of 3 points' and to be fair it is bizarre.

These, make no mistake about it, are good times for all connected with Arsenal Football Club.

END_OF_DOCUMENT_TOKEN_TO_BE_REPLACED

Through the lows and lows of a seemingly never-ending banter era, the idea of one day returning to the thick of a title race must have seemed a distant dream.

Disclaimer: Yes, it's only November. Yes, these are early days. Yes, it could yet go spectacularly wrong.

All that aside, with the World Cup break fast approaching, the Gunners are sitting pretty at the top of the table, winning all but two of their league games so far. And were it not for Manchester City fielding an actual robot up top, that gap might be even wider. 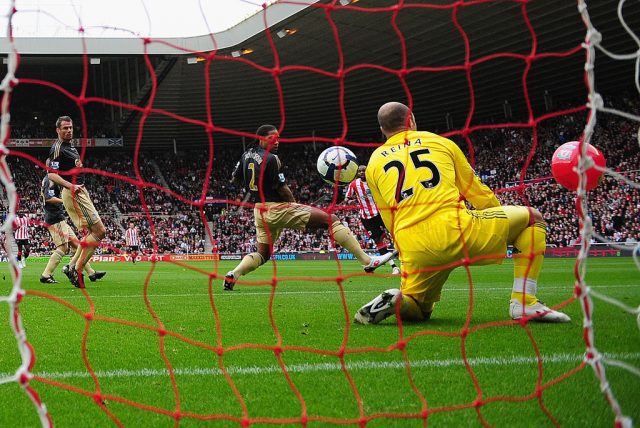 END_OF_DOCUMENT_TOKEN_TO_BE_REPLACED

If Mikel Arteta's men are to win the league this season, it will likely be decided by fine margins. Dropped points could be costly, perhaps explaining why one Arsenal fan has spent a bit too long analysing Southampton's recent equaliser against them in granular detail.

Footage uploaded on Twitter shows the buildup to Stuart Armstrong's leveller in the game at the end of October.

Particular attention has been paid to Aaron Ramsdale in the Arsenal goal, who appears to be distracted by something to his left.

He can be seen glancing away from the ball to look at it a couple of times.

Then, suddenly, a pass is slipped into Armstrong's path and he slides the ball beyond Ramsdale to make it 1-1.

What, we hear you ask, could possibly have broken the 'keeper's focus so much?

Well... erm, a pigeon. That's what. Casually going about its piegony life inside the six-yard box, blissfully aware of Kim Källström and Twitter arguments over a player being 28 until they're 29.

The video of it can be watched here. We've not embedded it in case it gets us in bother with the Premier League. Or the pigeon's mum and dad.

Arsenal couldn't find a response to the equaliser and were forced to settle for a draw.

Who knows? By the end of the season, it could be the difference between league victory and another year of disappointment.


popular
Everton release brutal 59-word statement to confirm Anthony Gordon departure
Five confirmed changes and guidelines to have big impact on 2023 Six Nations
"Every team did it!" - Paul O'Connell on Roy Keane comment to Ronan O'Gara that he couldn't deny
"It's crazy to think Bundee Aki might come straight in and start against Wales"
Owen Farrell praises Johnny Sexton in revealing interview ahead of Six Nations
British publication urges Gareth Southgate to claim Evan Ferguson for England
"I think Tyrone are going to go down this year" - O'Sullivan unimpressed by 2021 All-Ireland champs
You may also like
2 days ago
"Not cool" - Jurgen Klopp far from happy with question about late Liverpool fouls
2 days ago
John Egan breaks Wrexham hearts and denies Ryan Reynolds a Hollywood ending
2 days ago
Ryan Reynolds makes bullish prediction ahead of Wrexham's big FA Cup moment
2 days ago
Former England captain says Fabinho should have sent off for Evan Ferguson challenge
2 days ago
British publication urges Gareth Southgate to claim Evan Ferguson for England
5 days ago
Roy Keane on Man United's two most improved players since Ronaldo left
Next Page