A solid World Cup campaign certainly wouldn't have done Lionel Messi's legacy any harm but there's still no denying his status as one of the greatest of all time.

Messi is left considering his international future after watching Kylian Mbappe steal the show in France's dramatic 4-3 victory over Argentina on Saturday afternoon.

The Round of 16 clash saw Messi unable to carry his country into the quarter-finals and it could well prove to be the final World Cup for the 31-year-old. 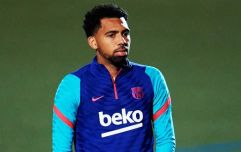 END_OF_DOCUMENT_TOKEN_TO_BE_REPLACED

"I think Messi would have fared better if he was in the France team," Gary Lineker said on BBC's coverage of the game.

Alan Shearer added that: "One of them (Mbappe) turned up today and one of them didn't. It was the youngster, 19 years of age, to put in a performance like that in front of the millions watching with Messi at the other end."

Antoine Griezmann opened the scoring from the penalty spot after Mbappe was felled following a stunning run at the Argentine defence.

And Griezmann's brother, Theo, has been widely criticised for his social media post in the wake of the game.

Theo Griezmann, who is an avid tweeter, shared an illustration of Messi being refused access to the quarter-finals by the French trio of his brother, Mbappe and Paul Pogba.

Fans of Messi were quick to defend the Argentinian captain by criticising the above tweet.

messi is still better than your brother. that’s the reason why he couldn’t make it to barcelona

Nice class. And your bro won't ever be better then Messi! Have fun just winning the Europa league!

You are? Another reason why your family is a disgrace. Messi is Messi world cup or not he is THE G.O.A.T!
You dare to come up here and post this shit!? he has already achieved more than you and your brother will ever! HAVE SOME RESPECT!!! If you know what that is!! asshole???

How many individual achievements you and your brother have together? Do not count the hair dying and the waxing?


popular
"It's giving the Kerry team a bad image. They don't look like footballers, they look like gurriers." - Liveline has peaked
Bundee Aki overheard in the stands after Faf de Klerk hit on Conor Murray
"That's one of the best races I've ever had" - Coscoran kicks like a demon to seize the day
Gatland on his decision to start Bundee Aki, and drop Tadhg Beirne
Eoin Murphy's calls from the goals show Cork they're in for a completely different ball-game
Warren Gatland pulls Joe Schmidt into Lions Tour refereeing drama
The SportsJOE 12 o'clock quiz | Day 377
You may also like
2 months ago
McGregor overtakes Ronaldo and Messi on Forbes highest-paid athletes list
3 months ago
Messi's absolute ridiculousness and all the best goals from Spain
4 months ago
Messi comforted by Angel Di Maria in emotional video after Barca defeat
6 months ago
Lionel Messi to sue newspaper that published staggering details of his contract
6 months ago
Teammates XI Quiz: Barcelona - 2011 Champions League Final
8 months ago
Barcelona players agree to pay cut to save club from collapse
Next Page