The wonderful world of Brazilian football

Brazilian football is full of skill, controversy, and shambolic organisation. It is a far cry from the glitz and the glamour of the Premier League, but it's never boring. That, you can be sure of.

In yesterday's fixture between Vasco da Gama and Flamengo, the most perfect example of Brazilian football's ridiculousness occurred, as an ambulance broke down in the middle of the pitch. 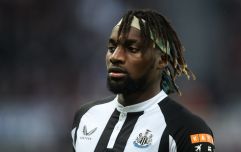 END_OF_DOCUMENT_TOKEN_TO_BE_REPLACED

The ambulance had come on to the field to escort an injured player, but could not make its way off as the engine began to fail.

But that wasn't going to prevent the players from finishing their match, with everything still to play for. The players helped get the vehicle going again, by coming together to give it a push, helping it on its way.

Ambulance breaks down on the pitch. Vasco and Fla players come together to give it a push-start so it can get a player to hospital. Oh, the symbolism https://t.co/W993CdQ2yM

Brazilian football might never develop into the commercial behemoth of the Premier League, but when things like this happen, I don't think I want it to.